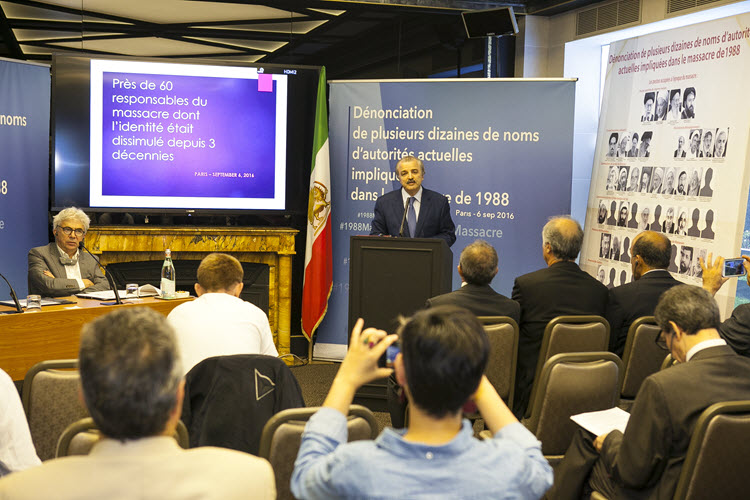 In the summer of 1988, a fatwa was issued. For political prisoners, this meant facing Death Commissions, which were formed in at least 70 towns and cities.

On September 6, the National Council of Resistance of Iran reported on remarks of Mohammad Mohaddessin, Chair of the Foreign Affairs Committee of the National Council of Resistance of Iran, who said,  “According to intelligence obtained by the People’s Mojahedin Organization of Iran (PMOI or MEK), most of the institutions of the Iranian regime are run by the perpetrators of the 1988 massacre of 30,000 political pris-oners. We have managed to obtain information about 59 of the most senior officials re-sponsible for this massacre, whose names had remained secret for nearly three dec-ades. They currently hold key positions in the various institutions of the regime. These individuals were members of the ‘Death Commissions’ in Tehran and 10 other Iranian provinces. An investigation is continuing to uncover the identities of other such crimi-nals,” and he added, “This intelligence and widespread information of the names of the martyrs and their burial sites and mass graves have reached the PMOI in recent weeks.”

In the summer of 1988, a fatwa was issued. For political prisoners, this meant facing Death Commissions, which were formed in at least 70 towns and cities. These Com-missions were made up of a religious judge and a prosecutor, who were appointed by the Supreme Judicial Council that was at the time headed by Abdul-Karim Mousavi Ar-debili, as well as and a representative of the Intelligence Ministry. Also, the deputy prosecutor and prison leaders had roles in carrying out Khomeini’s fatwa and cooper-ated with the Death Commissions. Only the members of the Death Commission in Teh-ran were known, as Khomeini directly appointed them.

An audio file came to light several weeks ago, of a meeting between Hossein-Ali Mon-tazeri, who was Khomeini’s heir at the time, and members of the Death Commission. What can be heard on the file shows the dimensions of the 1988 massacre, and has set off a storm in Iranian society.  Montazeri criticizes the scope and the swiftness with which 30,000 political prisoners, some as young as 14 or 15 at the time of their arrest, were executed and secretly buried in mass graves.

The identities of 789 minors and 62 pregnant women who were executed are included on a partial list of the martyrs, as well as 410 families who lost three or more members to the massacre. Only a fraction of the names of those executed have been able col-lected, thus far.

Six members of the Assembly of Experts, tasked with selecting the Supreme Leader’s successor, as they are the highest decision-making body of the regime, had roles in the massacre. They are Ali-Akbar Hashemi Rafsanjani, Ebrahim Raeesi, Mohammad Reyshahri, Morteza Moqtadaee, Zeinolabedin Qorbani Lahiji, and Abbas-Ali Soleimani.

The Judiciary body contains its share of officials responsible for the massacre. In ad-dition to the Justice Minister, we have identified 12 Judiciary officials who were in-volved in the massacre. They include Mostafa Pour-Mohammadi, the Justice Minister in Hassan Rouhani’s cabinet, Hossein-Ali Nayyeri, the head of the Supreme Discipli-nary Court for Judges, Gholam-Hossein Mohseni-Ejei, the First Deputy Chief and spokesperson of the Judiciary, Ali Mobasheri, a Supreme Court judge, Ali Razini, Dep-uty of Legal Affairs and Judicial Development of the Judiciary, Gholam-Reza Khalaf Rezai-Zare’e, a Supreme Court judge, and Allah Verdi Moqaddasi-Far, a senior mem-ber of judiciary.

Key financial institutions are run and controlled by many of the perpetrators of the 1988 massacre. The head of the Astan Quds Razavi conglomerate (in Khorasan Prov-ince) and his deputy, the Shah-Abdol-Azim endowment foundation in southern Teh-ran, and Nasser Ashuri Qal’e Roudkhan, managing director of the Atieh Damavand Investment Company.

Mohammad Mohaddessin goes on to say:

On August 9 of this year, an audio recording was revealed to the public which featured remarks by Hossein-Ali Montazeri, the former heir to Khomeini, in his meeting with members of the Tehran Death Commission that had been appointed by Khomeini. This audio recording is from August 15, 1988.

In this meeting, Montazeri states: ‘In my view, the biggest crime in the Islamic Republic, for which history will condemn us, has been committed at your hands. Your (names) will in the future be etched in the annals of history as criminals.’ He added: ‘People de-test the Velayat-e Faqih (absolute religious rule). … Beware of 50 years from now, when people will pass judgement on the leader (Khomeini) and will say he was a bloodthirsty, brutal and murderous leader… I do not want history to remember him like that.’

The publication of the tape has led to widespread discord among various regime offi-cials. The Deputy Speaker of the regime’s Parliament has demanded an explanation for the massacre, and the  Justice Minister Mostafa Pour-Mohammadi who until a few years ago flatly denied that he had a role in the 1988 massacre, has now openly de-clared that he is ‘proud’ of having carried out ‘God’s commandment’ to execute mem-bers of the People’s Mojahedin Organization of Iran.

As a result of such disunity, the regime took the unexpected step of temporarily closing down the Parliament on the pretense of a summer break, even though the summer re-cess had just been held.

Various officials of the regime have expressed fear that the principle of Velayat-e Faqih is shaking, ‘Khomeini’s image’ is being tarnished, and that the PMOI is being ‘re-deemed’ and receiving an ‘atmosphere of innocence’. The officials and institutions of the regime are all stating in their own way that if Khomeini did not initiate the massa-cre, the PMOI would have taken over after Khomeini’s death.

But Khomeini’s verdict was un-Islamic to the point that there has never been a single similar fatwa by any Shiite or Sunni religious jurisprudent in the past 1400 years. Therefore the vast majority of the regime’s top mullahs have not been willing to en-dorse it, and some have even gone so far as to bluntly question its validity even under the regime’s own interpretation of Islam.

We are faced with a crime against humanity and a massacre of political prisoners scope of which was unprecedented since World War II. But even more important is that the regime in power in Iran is currently being led and administered by the very same officials who were responsible for this crime against humanity.

The United Nations must set up a Commission of Inquiry into this massacre and take the necessary steps to bring the perpetrators of this great crime to justice. The impunity must end. Inaction in the face of this crime has not only led to further executions in Iran, but has also encouraged the regime to spread its crimes to Syria, Iraq and other countries of the region. Some 2,700 executions have been officially carried out in Iran since Rouhani took office. Just several weeks ago some 25 Sunnis from Iranian Kurdi-stan were hanged en masse in a single day, and several days later another three polit-ical prisoners from Ahvaz were executed.

The Iranian people and Resistance demand an international investigation into the 1988 massacre. They also demand that any economic relations with the regime be predicated upon a halt to executions. We call on the international community, in par-ticular Western and Muslim countries, to condemn this great inhuman and un-Islamic crime. Silence in the face of this crime violates the principles of democracy and human rights and goes against the teachings of Islam.

In recent weeks there has been an unprecedented volume of information about the names of the martyrs and the locations of their mass graves has been sent to the Irani-an Resistance by the relatives of the victims, officials who have parted ways with the regime and even from within the regime itself, and we plan to make them public in due course.

We call on all human rights organizations and institutions, and Islamic scholars and clerics, both Shiite and Sunni, to assist the Iranian people in their legitimate demand to bring the perpetrators to justice.”