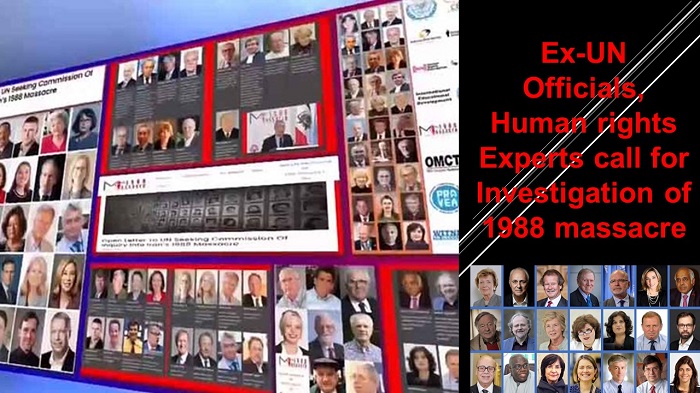 The regime’s President Ebrahim Raisi’s “selection” on June 18 should heighten the urgency for an international investigation into the fundamentalist regime’s crime against humanity and violation of human rights.

Raisi was one of the perpetrators of the 1988 massacre in which 30.000 political prisoners the majority of them members or supporters of the People’s Mujahedin of Iran (PMOI / MEK Iran), were sentenced to death following Khomeini’s infamous fatwa in just a few months.

Cracking down on dissent

Raisi´s appointment not only underlined Khamenei’s determination to reward those responsible for the 1988 massacre, but it also allowed the former death commission prosecutor to build on his legacy by cracking down on large-scale protests and other forms of popular dissent.

Raisi was appointed head of the judiciary around eight months before a widespread anti-government protest movement erupted in November 2019. It was widely recognized as a follow-up to a previous uprising in December 2017 and January 2018, which reached approximately 200 areas.

The authorities responded by killing nearly 1,500 peaceful protestors in shooting incidents over the course of just a few days, then torturing thousands of arrestees involved in the uprising, reported by amnesty international.

Raisi was a key figure in the crackdown. His election to the presidency raises concerns of further crackdowns along these lines, especially now that Raisi has been replaced as judiciary chief by Gholam Hossein Mohseni Ejei, another key figure in the 1988 massacre.

The promotion of death commission members as a group feeds into the culture of impunity that has surrounded the massacre and the regime’s long history of human rights violations. However, the regime’s dedication to hiding the truth regarding the scope of the massacre, as well as the international community’s failure to enforce demands for transparency and accountability, have contributed to the impunity.

Call for international inquiries into the 1988 massacre

Meanwhile, The National Council of Resistance of Iran (NCRI), and the People’s Mujahedin of Iran (PMOI / MEK Iran), have attempted to aid international inquiries into the 1988 massacre by stressing previous and current attempts by its intelligence network to locate mass graves.

Today, such graves have been discovered in at least 36 different Iranian cities, though some of them have already been destroyed by construction and development projects aimed at complicating future investigations and preventing survivors and families of the massacre from gathering to commemorate Tehran’s attempt to completely annihilate the MEK.

Defenders have faced a flood of harassment

Those same victims’ defenders have faced a flood of harassment and threats from the authorities, some of which were outlined in a letter written directly to the authorities by UN human rights experts in September 2020.

After Tehran refused to respond, the UN experts’ letter was published for a broader audience in December 2020, demonstrating Tehran’s continued support of the massacre and the various human rights atrocities that have developed out of its legacy.

The political crisis in Iran should remind western leaders that they have a moral obligation to address Iran’s human rights violations. At the same time, they should conclude from the current state of social unrest that actions to this end may also serve to promote and amplify those Iranian voices that can lead the country to a future free of the abuses perpetrated by the theocratic dictatorship.