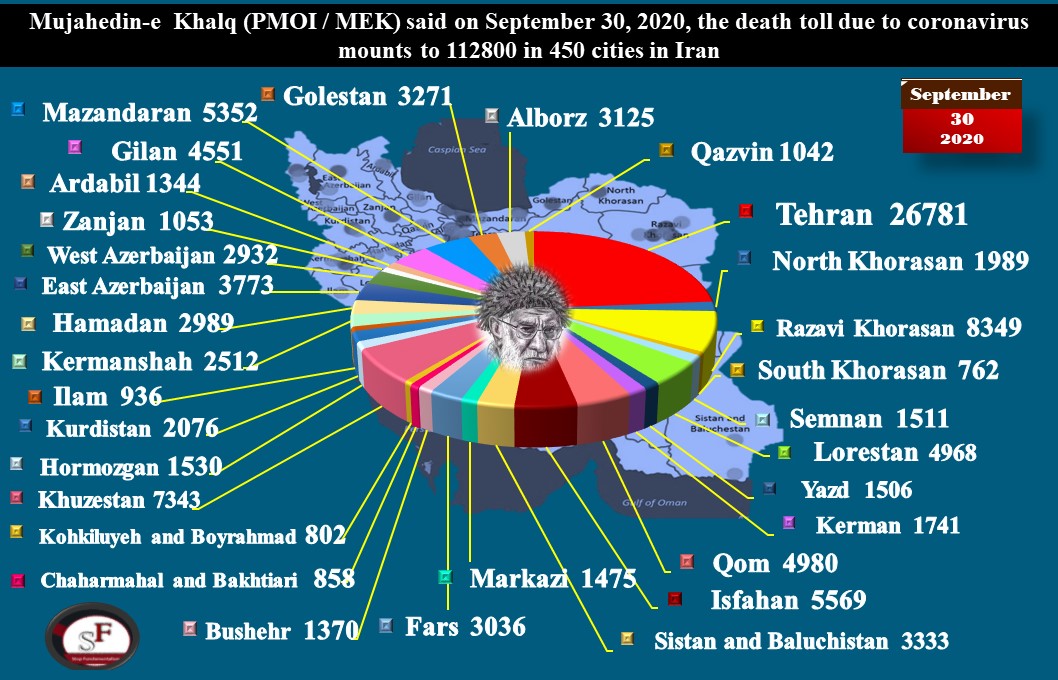 More than 112,800 people have died from coronavirus in Iran, according to the People’s Mojahedin Organization of Iran (PMOI / MEK Iran).

More than 112,800 people have died of the novel #coronavirus in 450 cities checkered across all of Iran's 31 provinces, according to the Iranian opposition PMOI/MEK.

These are the death tolls in the following provinces:

Of course, these do not include figures from provinces that may not have updated overnight and they are likely to be just the minimums because the regime attempts to hide the true figures – claiming just 26,169 deaths – by threatening medical staff and relatives.

Some regime officials are beginning to admit the problem though. Health Minister Saied Namaki said Tuesday that while it used to take a couple of weeks for stats to double, they are now doing so in a very short time and that more deaths can be expected soon. While several local Medical Sciences Universities reported high infection and death rates.

Over 112,800 people have died of the novel #coronavirus in 450 cities checkered across all of #Iran’s 31 provinces, according to reports tallied by the Iranian opposition PMOI/MEK as of Wednesday afternoon local time, September 30.https://t.co/czgg2pKHLb

Hospital staff has been reporting the same thing for months. A senior ICU expert in Tehran’s Masih Daneshvari Hospital on Tuesday described conditions in Tehran as “critical” and called for the capital to be “quarantined as soon as possible”.

The expert said: “There are no empty ICU beds and patients are waiting in long lines even to be accepted into emergency sections. The number of dire patients in Tehran has increased significantly. All ICU beds in government hospitals are filled and if I contract the virus today there is no ICU bed even for me who has worked in this branch for years… The number of patients in need of ICU care is rising. There is no management or a method available for us to know in which hospital we can find an empty ICU bed. If a patient’s conditions deteriorate, we are forced to call one hospital at a time to ask if they have an ICU bed empty, and the answer is usually no.”

According to the report by, the National Council of Resistance of Iran’s (NCRI), wrote: “The mullahs’ performance in…

They advised that most private hospitals don’t have the capacity for coronavirus patients and that the medicine distribution management system is extremely flawed because only one or two doctors per hospital are allowed to prescribe Remdesivir – the drug they’re using as a treatment – and private hospitals are not given any at all.

Mrs. Maryam Rajavi President-elect of the National Council of Resistance of Iran (NCRI): The abnormal surging trend of the number of coronavirus victims in Iran is a product of the criminal policies of Khamenei and Rouhani.