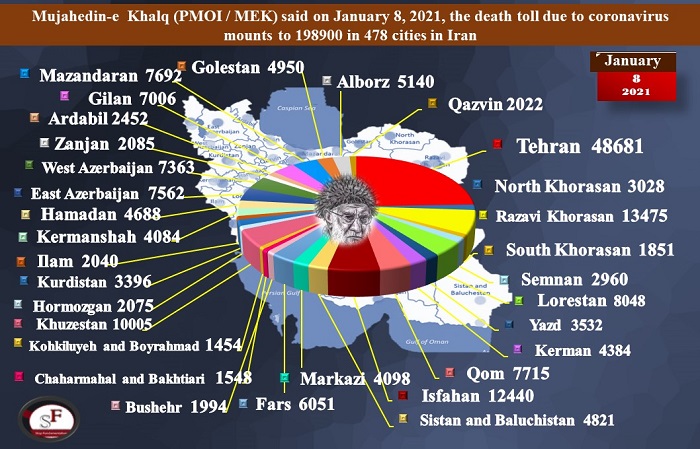 The National Council of Resistance of Iran (NCRI), and the People’s Mojahedin Organization of Iran (PMOI / MEK Iran) reported that the Coronavirus death toll in 478 cities in Iran had exceeded 198,900.

More than 198,900 people have died of the novel #coronavirus in 478 cities checkered across all of Iran's 31 provinces, according to the Iranian opposition PMOI/MEK.

While by most conservative assessments, the COVID-19 death toll in Iran has almost reached 200,000.

In a heinous act of weaponizing the #COVID19 affliction to shield his moribund regime against people’s uprising, Khamenei issued the death sentence of countless Iranians by banning the internationally approved COVID-19 vaccines. He knows more #IranProtests are on the horizon. pic.twitter.com/kyh6K48HMX

Khamenei showed his true colors, by saying that: he opposed importing COVID-19 vaccines. he left no doubt that he was responsible for the death of thousands of deprived and oppressed compatriots left at the mercy of Coronavirus.

He said, “American and British vaccines are banned from being brought into the country. I told this to officials, and I will publicly announce it now. If Pfizer can make the vaccine, why do they want to give it to us?

Why don’t they use it themselves, not to have these many deaths… the same goes for Britain.” Under questioning the approved vaccines by WHO, he added, “I have no trust in them either. I do not know; sometimes, they want to test their vaccines on other nations to see if it works or not?

As the number of fatalities of #coronavirus in #Iran is almost 200,000, criminal Khamenei banned the import of UK, US vaccines. This is crime against humanity. Do you remember the regime’s apologists and facilitators kept pushing the line that sanctions curtail access to vaccine? pic.twitter.com/qR43sbugUW

Of course, I am not optimistic about France either… We can get the vaccine from other places if it is safe. There’s nothing wrong with that.” Instead Khamenei turned to the “domestic vaccines” which are supposed to be produced by the foundations under his control.

Khamenei added, “The vaccine that was prepared for Coronavirus should not be rejected. This is the source of honor for the country… Well, if, in one case, it has been tested on humans and has been successful (no-one) should try to deny it. So far. It has been successful until now, and God willing will continue to be successful.”

After Khamenei’s remarks, the spokesperson for the Red Crescent Society said, given Khamenei’s speech, “regarding the ban on importing vaccines from the United States and Britain, the purchase of 150,000 doses of COVID-19 vaccine from the United States has been canceled. We are currently pursuing the purchase and import of one million doses of vaccine from three countries, China, India, and Russia,” he added, according to the Mehr news agency, January 8, 2021.

#WeStand4FreeIran
The Iranian Resistance warns: Khamenei has proved that he is using #coronavirus as a blessing and opportunity to protect his regime through heavy casualties, from further expected uprising and protests aimed to overthrow the mullahs in Iran.#واکسن_حق_مردم pic.twitter.com/bEwdnx62UN

According to regime experts, the vaccines would not be ready any sooner than July, if usable.

Khamenei’s callous remarks come at a time that according to Minoo Mohraz, a scientific member of the NCCT, talking to Khabar-Fori news site: “There is a possibility of a severe Coronavirus outbreak in the country with the beginning of the cold season in February and we are expecting the next peaks.”

Governor of Mazandaran: The number of hospitalized patients has doubled compared to late November 2020.

Golestan University of Medical Sciences: COVID-19 deaths have grown to two digits per day again. The risk of an outbreak has increased in the coming days.

Vaccines are people’s right. The death toll is nearing 200,000, but Khamenei says no vaccines could be imported from the US, UK & France. By huge human casualties, he seeks to fend off popular uprisings. The #Coronavirus & Khamenei are allies against the people of #Iran.

Mrs. Maryam Rajavi the President-elect of the National Council of Resistance of Iran’s (NCRI): Vaccines are people’s right. The death toll is nearing 200,000, but Khamenei says no vaccines could be imported from the US, UK, and France. By huge human casualties, he seeks to fend off popular uprisings. The Coronavirus and Khamenei are allied against the people of Iran.