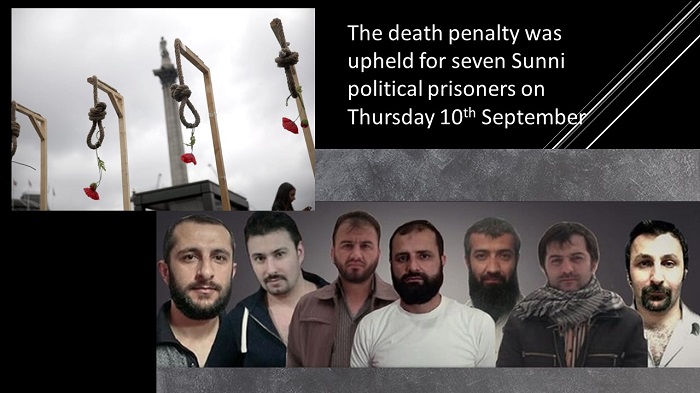 The Iranian regime has been sentencing an increasing number of people to death sentences.

The death penalty was upheld for seven Sunni political prisoners on Thursday 10th September. Just before Branch 38 of the Iranian Supreme Court announced that the death penalties would be upheld, there was international condemnation of the regime’s death sentences against peaceful protesters that participated in the widespread protests in August 2018 and November last year.

The seven Sunni prisoners of conscience are Farhad Salimi, Qassem Absteh, Davood Abdollahi, Ayub Karimi, Anwar Khezri, Khosrow Besharat, and Kamran Sheikh. They were arrested in 2009 and have been imprisoned in Evin, Gohardasht and Urmia prisons.

Their death sentences had already been appealed twice previously. Different branches were involved in the appeals and it clearly made no difference – each one is obviously as corrupt as the next.

The prisoners of conscience were charged with a number of offences such as “moharebeh” (waging war against God), “acting against national security”, “corruption on earth” and “propaganda against the state”.

Branch 38 of the Iranian Supreme Court for a third time upheld the death sentences against seven Sunni political prisoners on September 10.#StopExecutionsInIran#FreePoliticalPrisonershttps://t.co/l6JKqD0OXp

The Iranian regime’s excessive use of the death penalty is to instil an atmosphere of fear, to prevent people from voicing their dissent. However, the people of Iran have made it clear that they will not be intimidated into silence. The regime knows that another nationwide uprising could be the event that pushes the regime towards collapse, but its suppression of the people is most likely going to precipitate the fact.

A recent social media campaign where the hashtags نکنید_اعدام# and #StopExecutionInIran have been used shows that the people of Iran are opposed to the judiciary’s reliance on the death penalty. Millions of people from Iran and abroad openly criticised the regime’s judiciary.

International human rights organisations have also been speaking out about the recent executions of high profile political prisoners.

Maryam Rajavi, #NCRI, said: “The mullahs’ Judiciary abhorrent verdict against the wife and children of Mostafa Salehi demonstrates that the brutality and inhumanity of the ruling mullahs know no bounds.#MEK #Iran https://t.co/IV9cLaszSV pic.twitter.com/IhhUWC2Cdh

One such execution was that of Mostafa Salehi. He was executed in secret on Wednesday 5th August. After his arrest (for participating in December 2017 to January 2018 uprising) he was tortured into making a confession which was then used as the basis of the court’s sentencing.

The human rights situation in Iran has been extremely concerning for decades, and in recent months the situation has continued to degrade further. Political prisoners are routinely tortured – both physically and psychologically – and they are not given fair trials. Many are not given access to a lawyer, or to their families, and many are not even allowed to attend their own trial.

Human rights organisations around the world, and the United Nations and the relevant bodies, have an obligation to take action to put a stop to the numerous executions that take place in Iran. They have a responsibility to ensure that political prisoners are released from prison and to compel the regime to respect the international conventions it is bound to.

Mrs Maryam Rajavi the President-elect of the National Council of Resistance of Iran’s (NCRI): Call for action in Iran and around the world to prevent the executions of 7 Sunni political prisoners. The bereaved families of political prisoners Ramin Hossein Panahi, Zanyar and Loghman Moradi who were innocently executed last year are still seeking justice for them.

Call for action in #Iran and around the world to prevent the executions of 7 Sunni political prisoners. The bereaved families of political prisoners Ramin Hossein Panahi, Zanyar and Loghman Moradi who were innocently executed last year are still seeking justice for them.