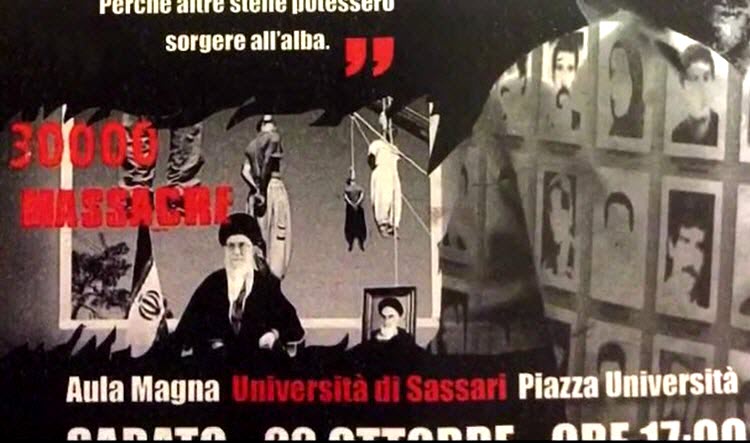 In Sassari, Italy, a conference has been held at the city’s Central University in commemoration of the tens of thousands of political dissidents who were killed by the Iranian regime in 1988. The conference was widely reported in the media and via social networks.

The major of Sassari said (through her Facebook page): “The city of Sassari, too, joins the freedom-lover Iranians and supporters of the justice-seeking movement for the 30,000 political prisoners massacred in Iran during the summer of 1988, to condemn this Iranian regime’s crime against humanity.”

Reporting about the conference at the university, the country’s Channel 12 said: “The conference, held by the Iranian Youth Association in Italy, was aimed at drawing public attention to the massacre (of more than 30,000 political prisoners in the Summer of 1988) which is a hidden tragedy and (part of) the ongoing oppression the Iranians have been suffering from.”

The same channel also spoke about the worsening human rights situation in Iran since the appointment of Hassan Rouhani, pointing out that the number of executions carried out is on the rise. They said in their report: “(The) number of executions including execution of juveniles has increased and an uninterrupted widespread oppression is still going on.”

In attendance, among others, were: Nicola Sanna, mayor of Sassari; a representative from Amnesty International; a representative from Amalia Eskiro; and chairman of the Sassari’s cultural commission, Rafaela Sao. They all praised the women in the Iranian Resistance, congratulating them on their achievements, and called on those in attendance to continue with their campaign.

‘La nuova Sardegna’ newspaper wrote an article entitled ‘Iran, hidden killings and trampled human rights’. It reported on the conference at the university, organized by the Iranian Youth Association in Italy, and described how the Iranian Resistance spoke about the massacre that saw 30,000 political prisoners lose their lives in 1988. It said: “Today, Iran’s situation is not any different. The proof of that is the latest annual report by the UN Secretary General which points to the high number of executions including the execution of juveniles as well as the continuation of the physical punishment. The seminar was also supported by Amnesty International and a number of other organizations.”