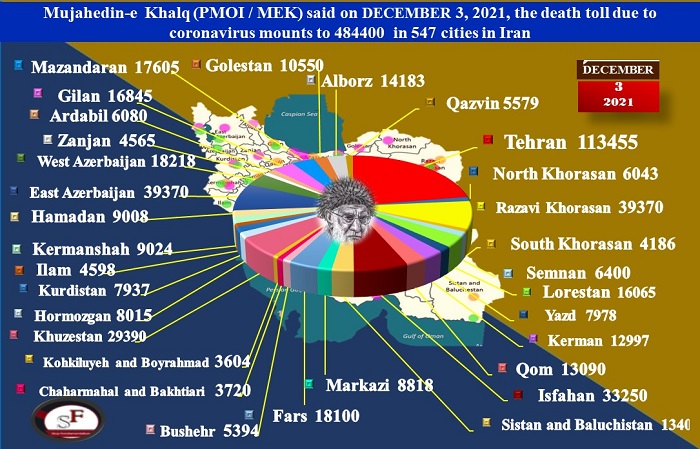 According to the Iranian opposition group The National Council of Resistance of Iran (NCRI), and the People’s Mujahedin of Iran (PMOI / MEK Iran), 484,000 people had died in Iran as a result of the Covid-19 outbreak as of December 3.

The regime’s Health Ministry announced the mullahs’ engineered Covid-19 numbers from the past 24 hours on Friday as 78 deaths and 3603 new cases. Furthermore, 3296 patients are in ICUs and 649 of the new cases have been hospitalized.

Schools in Tehran Province is still not ready to reopen

A significant percentage of schools in Tehran Province is still not ready to reopen, and (given the COVID-19 protocols) there is no necessary infrastructure for reopening schools in many areas. (Mehr news agency, December 3, 2021)

Head of Qom’s Health Center: Seven classrooms have been closed due to the positive COVID-19 test of 48 students. (State-run media, Arya, December 3, 2021)

Shiraz University of Medical Sciences spokesperson said: In the past 24 hours, 142 COVID-19 patients were hospitalized. There are currently 1,008 COVID-19 inpatients, and 136 are in the ICU. (Medical University’s official website, December 3, 2021)

Yasuj University of Medical Sciences spokesperson said: “The cities of Boyer Ahmad and Kohgiluyeh rank atop our list of the number of Covid-19 cases in this province,” said the dean of Yasuj Medical Sciences University regarding Kohgiluyeh & Boyer Ahmad province on Friday, according to the Fars news agency, an outlet linked to the regime’s Revolutionary Guards (IRGC).

West Azerbaijan University of Medical Sciences spokesperson said: During the past 24 hours, 378 COVID-19 patients were admitted, 144 were in the ICU, and 28 were connected to ventilators.