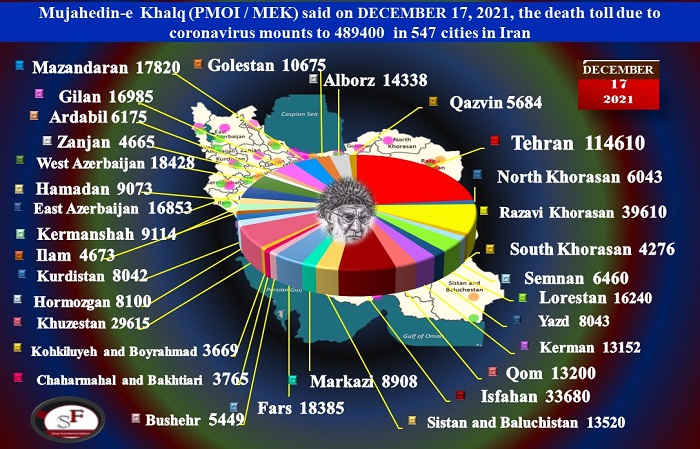 According to the Iranian opposition group The National Council of Resistance of Iran (NCRI), and the People’s Mujahedin of Iran (PMOI / MEK Iran), 489,400 people had died in Iran as a result of the Covid-19 outbreak as of December 17.

There is an Omicron strain in Iran

Member of the Scientific Committee of the National Coronavirus Combat Taskforce (NCCT): There is an Omicron strain in Iran, and its sequence will be recognized soon. (Borna news agency, December 17, 2021)

Director of Provincial Education department for Khorasan Razavi: In the last academic year, 44,150 students dropped out of school due to the consequences of Coronavirus. (Moj news agency, December 17, 2021)

West Azerbaijan University of Medical Sciences spokesperson said: Currently, half of the nurses working in the Province do not have job security. (State-run media, Tabnak, December 17, 2021)

Mrs. Maryam Rajavi the President-elect of the National Council of Resistance of Iran’s (NCRI): COVID19 fatalities in #Iran has surpassed 489,400, the highest per capita figure in the world, even based on most conservative estimates. My condolences to Iranians, especially the victims’ families. I pray for the recovery of those infected.