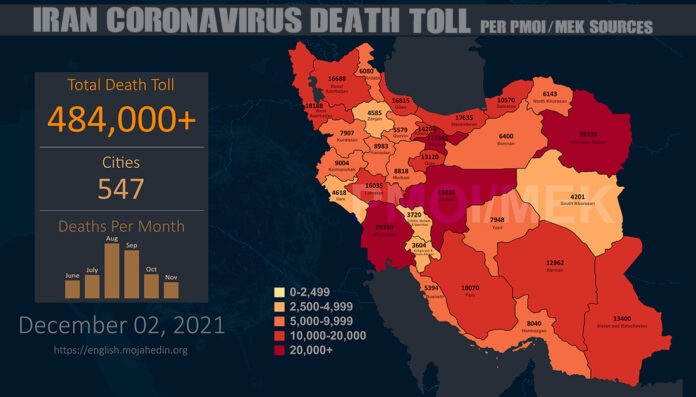 According to the Iranian opposition group The National Council of Resistance of Iran (NCRI), and the People’s Mujahedin of Iran (PMOI / MEK Iran), 484,000 people had died in Iran as a result of the Covid-19 outbreak as of December 2.

Four hundred COVID-19 patients were hospitalized last night. The daily hospitalizations have been in three digits for the past five months. (Tasnim news agency, December 2, 2021).

In Kashan, the Coronavirus is spreading, and the situation is still orange. The rise in new COVID-19 patients is very worrying.

The regime’s Health Ministry announced the mullahs’ engineered Covid-19 numbers from the past 24 hours on Wednesday as 76 deaths and 3839 new cases. Furthermore, 3314 patients are in ICUs and 623 of the new cases have been hospitalized.

West Azerbaijan University of Medical Sciences spokesperson said: “The number of people hospitalized each day during the past five months has been in triple digits and has yet to drop to double digits. These figures indicate that the spread of coronavirus in West Azerbaijan remains significant,” according to a statement released on Thursday by the West Azerbaijan Covid-19 Task Force.

“During the past 24 hours 400 coronavirus patients have been hospitalized in [West Province] hospitals, of which 148 are in ICUs and 33 are under ventilators,” said the dean of West Azerbaijan Medical Sciences University on Thursday, according to the Tasnim news agency.

Yazd University of Medical Sciences spokesperson said: Currently, 98 COVID-19 patients are admitted to the ICU, and 341 patients are hospitalized in the Province. (Mehr news agency, December 2, 2021)

Qazvin University of Medical Sciences spokesperson said: Due to the four-fold jump in COVID-19 infections, we will see a further increase in COVID-19 hospitalization rates. (Tasnim, December 2, 2021)

Shiraz University of Medical Sciences spokesperson said: In the past 24 hours, 131 COVID-19 patients were admitted to the Provinces’ hospitals. There are currently 1,044 COVID-19 inpatients, and 144 are in the ICU. (ISNA news agency, December 2, 2021)