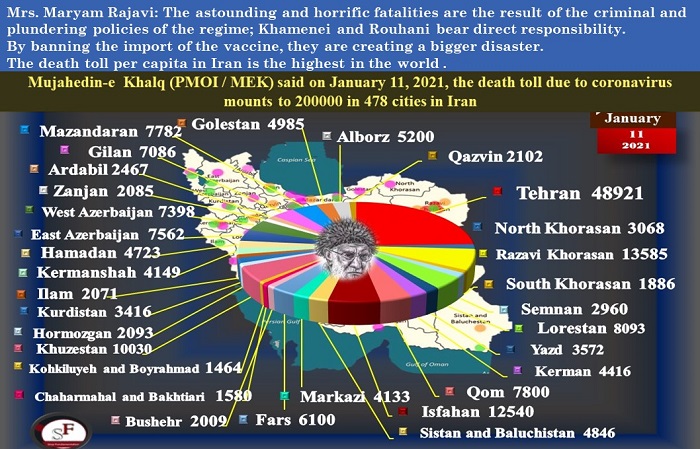 The National Council of Resistance of Iran (NCRI), and the People’s Mojahedin Organization of Iran (PMOI / MEK Iran) has reported that more than 200,000 people have died in Iran after contracting COVID-19. Every single province has been affected, including 478 cities across the country. The Iranian regime, however, is reporting that the death toll stands at 56,262 – less than a third of the actual figure. In Tehran alone, the (NCRI) and (PMOI / MEK Iran) has recorded 48,921 deaths.

More than 200,000 people have died of the novel #coronavirus in 478 cities checkered across all of #Iran's 31 provinces, according to the Iranian opposition PMOI/MEK. pic.twitter.com/jrR30LoR9P

Speaking about the large numbers of cases in Tehran, the head of the Coronavirus Task Force Alireza Zali said on Saturday that the area will soon have to be classed, again, like an orange zone if there is an increase of as few as 150 new daily cases requiring hospitalization. He said that there are 1,362 patients with Coronavirus in the medical centers managed by Babol and Mazandaran Medical Sciences University and that 183 of them came in during the previous 24 hour period.

More than 200,000 people have died of the novel #coronavirus in 478 cities checkered across all of Iran's 31 provinces, according to the Iranian opposition PMOI/MEK.

In a huge blow to the people of Iran that have been hoping for access to a vaccine like many of their neighbors and many countries across the world, the Iranian regime has announced that there is a ban on vaccine imports from France, the United States, and Great Britain. These countries have vaccines that have been approved for use in their respective countries, so it would have been a very significant move and a huge boost to morale in the country had they become accessible to the people.

President Hassan Rouhani and Supreme Leader Ali Khamenei have tried to spin the story to make out that foreign countries are trying to test their vaccines on the people of Iran. In a statement, several hundred members of the Iranian Parliament said that it would “save the lives of our compatriots” to ban French, British and American produced vaccines. They said that the Supreme Leader’s final remarks on the import ban would be the end of the story.

Instead of protecting the lives of the people, the Iranian regime is actually doing nothing but ensuring that the death toll continues to rise sharply in the country. The World Health Organization (WHO) has approved the vaccines and they are being used in numerous countries across the world.

Furthermore, it was reported last week that Iran and Cuba have signed an agreement to finalize clinical trials of a vaccine in Iran. A spokesperson for the Ministry of Health said that around 50,000 volunteers would be called up to take part in trials.

The Health Minister Saied Namaki also confirmed that the country is working with Cuba to produce a vaccine. He said that there should be a “relative” mass production by the end of Spring.

However, the deputy speaker of Parliament said a couple of days ago that given the critical situation in parts of the country, the production of the volume of vaccine needed could take around 15 months.

Mrs. Maryam Rajavi, the President-elect of the National Council of Resistance of Iran (NCRI), said: This catastrophe is the direct result of the clerical regime’s criminal policy and their plundering of the Iranian people’s resources in the past ten months.