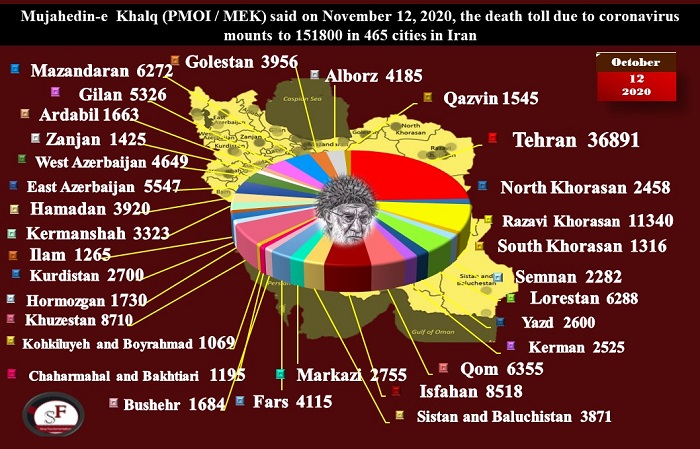 More than 151,800 people have died in Iran after contracting COVID-19 according to the latest figures announced by the People’s Mojahedin Organization of Iran (PMOI / MEK Iran), which has been closely monitoring the health crisis since the beginning. The official toll announced by the regime is just a quarter of the actual figure, which stands at 40,121.

A spokesperson for the regime’s Ministry of Health has said that the regime’s official death toll has been engineered and announced an unprecedented number of deaths during the previous 24 hour period.

More than 151,800 people have died of the novel #coronavirus in 465 cities checkered across all of Iran's 31 provinces, according to the Iranian opposition PMOI/MEK.

Many regime officials, as well as medical and scientific experts, are calling for a lockdown of at least two weeks across the country, in particular in Tehran and other major cities. Yet President Hassan Rouhani is still opposed to such measures.

Iraj Harirchi, the Deputy Health Minister, said earlier this week that 65 deans of medical sciences universities wrote to the Minister of Health urging for a shutdown to take place for a minimum of two weeks. He emphasized that their views matter because they are the “experts and officials on the ground”, adding also that the majority of them have contracted the virus at some stage and are best placed to advise on measures to take.

The Deputy Minister of Health also indicated that “small and temporary measures will not be effective” as it stands, because there are new daily deaths in the hundreds and more than 3,000 people a day are seeking medical treatment. He said that the current situation is critical and that “our 6,000 ICU beds are full”.

Over 151,800 people have died of the novel #coronavirus in 465 cities checkered across all of #Iran’s 31 provinces, according to reports tallied by the Iranian opposition PMOI/MEK as of Thursday afternoon local time, November 12.https://t.co/befUoxQ9LG

Members of the National Coronavirus Task Force have also recommended a series of measures to be implemented, but they are largely ignored by the Iranian President. One of its members, Masoud Mardani, said on Wednesday in no uncertain terms that a lockdown is essential but that there has been opposition.

Deputy Health Minister Sara Kalhor reiterated this position, describing the current situation as “dire”. She said that a two-week lockdown was rejected and 12-hour limitations for provincial capitals and major cities were put in place instead. She said that the limitations have not been respected.

Minoo Mohraz, another member of the National Coronavirus Task Force, said that the price the government is paying for managing hospitals and medical treatment is “extremely high” and that a good part of this sum could instead be given to the people so they can remain at home to get the spread of the virus under control. She said: “One truly cannot put a price on people’s lives. It is in the country’s interests to decrease our medical treatment expenses.”

Tehran's massive Behesht-e-Zahra cemetery is struggling to keep up with the death toll from the coronavirus pandemic ravaging Iran. Double the usual number of bodies arrive each day, and grave diggers have excavated thousands of new plots. https://t.co/BEgwwfqqWj

It is very clear that lockdowns across the country should be implemented, as many other countries across the world are now doing, but the Iranian regime’s priorities have never been in the right place since the beginning of the outbreak. Its negligence and mismanagement are prolonging this crisis and making it extremely challenging for the front line workers to deal with.

Mrs. Maryam Rajavi the President-elect of The National Council of Resistance of Iran’s (NCRI): The mullahs’ inhuman regime is responsible for the new wave of the outbreak and the growing number of victims in Iran. They do not think of anything but further plunder and preservation of their disgraceful rule.