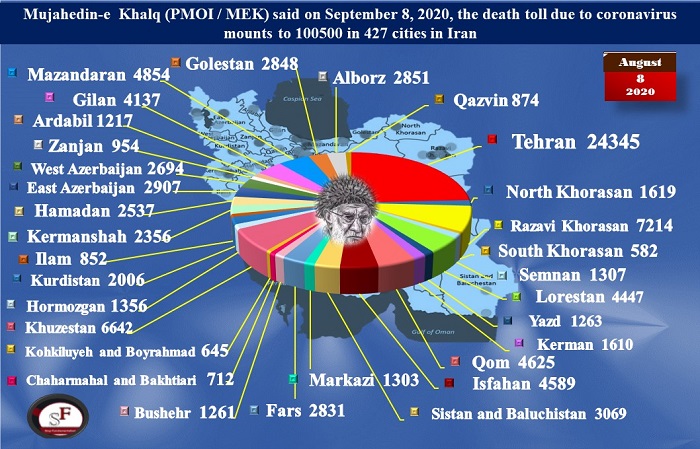 The main opposition to the Iranian regime, the People’s Mojahedin Organization of Iran (PMOI / MEK Iran) has reported that more than 100,500 people in Iran have now died after contracting COVID-19. More than 427 cities across the country have been affected and not a single one of Iran’s 31 provinces has been spared.

The (PMOI / MEK Iran), made the decision to closely monitor the situation before the health crisis unrolled in Iran. It knew that the regime could not be trusted to report accurately on the situation. As we have seen over many years, statistics provided by the regime are grossly understated. Once again, it remains true to this tactic as the official death toll it is reporting is just 22,410.

More than 100,000 people have died of the novel #coronavirus in 427 cities checkered across all of Iran's 31 provinces, according to the Iranian opposition PMOI/MEK.

The (PMOI / MEK Iran) has established that the death toll in Tehran alone stands at 24,345 so far.

Every day there are reports of more and more deaths and it is very hard for the people of Iran to see an end to this worrying crisis. And to add to their worries, the decision to reopen schools has been made.

The Ministry of Education has said that the decision came from the National Coronavirus Task Force that is chaired by President Hassan Rouhani. The Deputy Health Minister has expressed concern about the decision, explaining that there could be a third wave of the virus. Reza Malakzadeh also pointed to the consequences with regard to the health service. He said that medical workers are going to once again struggle with the number of patients requiring hospitalization.

The People’s Mojahedin Organization of Iran (PMOI/ #MEK) announced on Tuesday, September 8, 2020, that the #Coronavirus death toll in 427 cities across #Iran had passed 100,500.#COVID19 https://t.co/etuK140Hsm pic.twitter.com/F3gOvINsxK

A state-run newspaper wrote a few days ago that the decision to reopen schools is a mistake that will bring deadly consequences. Resalat wrote: “It might not be proper to say this, but the physical reopening of schools is a genocide—especially among the poor segments of the society—given the warnings of tough autumn being ahead of us.”

Medical and scientific experts are saying that there is going to be an almost certain increase in the number of cases in the weeks to come because of a number of factors including the reopening of schools.

A spokesperson for the Medical Sciences University of Hormozgan said that there are currently 52 patients hospitalized in intensive care units across the province, eight of whom died in the past 24 hours. They said that there is going to be a “growing trend” in the number of patients needing hospitalization in the next few weeks.

The dean of the Medical Sciences University in Eastern Azerbaijan said that in the past few days the number of patients needing hospital care in the province has doubled.

At the University of Medical Sciences in Gilan, the deputy dean indicated that more people enter hospitals every day than the number of people that are discharged. The deputy dean also highlighted that the duration of hospitalization is on the increase too, with the average stay increasing to 18 days from less than two weeks.

Mrs. Maryam Rajavi the President-elect of the National Council of Resistance of Iran’s (NCRI), said that Ali Khamenei, despite holding billions of dollars of Iranians cash, has barely spent a cent on helping to combat coronavirus.