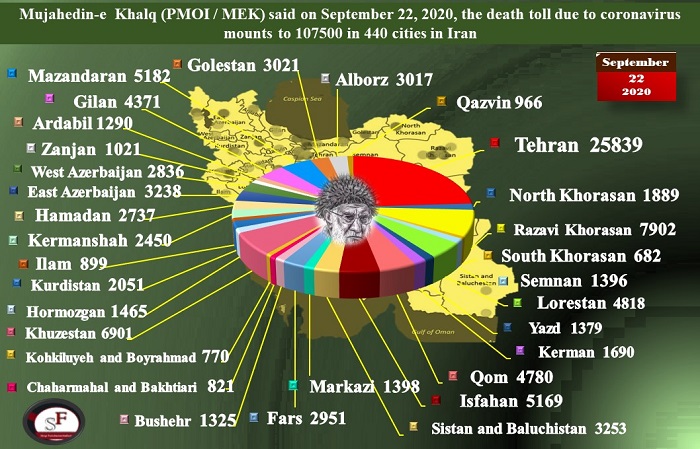 The People’s Mojahedin Organization of Iran (PMOI / MEK Iran) has reported that more than 107,500 people in Iran have died after contracting COVID-19. Every single province has been affected and 440 cities have battled, or are continuing to battle, with this health crisis that has continued for months.

Over 107,500 people have died of the novel #coronavirus in 440 cities checkered across all of #Iran’s 31 provinces, according to reports tallied by the Iranian opposition PMOI/MEK as of Tuesday afternoon local time, September 22.https://t.co/ro8cALwMaF

Once again, the Iranian regime has reported a death toll that is much lower than that reported by the (PMOI / MEK Iran)– around a fifth. The regime’s latest death toll stands at 24,656. This figure is implausible considering that the death toll in the Tehran area alone is 25,655.

Since the beginning of the health crisis in Iran, officials have tried to put the responsibility on the people. However, the people have received very poor direction from the government and they have no idea what they are supposed to be doing or not doing.

Furthermore, regime officials including President Hassan Rouhani and Supreme Leader Ali Khamenei have been saying that the people are responsible for the high death toll because they have not been following social distancing instructions.

Very recently, the Supreme Leader said that COVID-19 should not be underestimated and that “the cure is in our own hands”. He said that the people of Iran need to “take measures” that she said should be “based on our responsibilities”.

As the regime officials in #Iran acknowledge that the entire country is red with respect to the pandemic, Khamenei says that it is the people who must do their duty in fighting the disease,adding salt to the injury of millions of bereaved & sick Iranians &their families #Covid_19

The government handling of the health crisis has been a shambles and health experts are even saying that the people are confused about what should be happening. For example, people do not know whether they should be working for home or if they should be traveling to work. The people are even unaware of the status of public transport in major towns and cities across the country.

During the regular Coronavirus Task Force meetings, the government is warned about the situation and how it is evolving. The government is also advised by experts about what will happen if certain measures are not taken. During the latest meeting on Sunday, the Iranian Minister of Health Saied Namaki warned President Rouhani that if the death rates in Isfahan are set to increase at an alarming rate in the next few weeks.

His deputy warned in the same session that this is already happening in Qom where there has been a massive increase in the number of people needing to be hospitalized. In one week, the figure has gone from 271 to 531.

The Deputy Minister of Health also said that it is becoming increasingly clear that the herd immunity argument is baseless.

More than 106,800 people have died of the novel #coronavirus in 440 cities checkered across all of Iran's 31 provinces, according to the Iranian opposition PMOI/MEK.

Cases all across Iran are on the rise, certainly due to the reopening of schools and the after-effects of the Muharram mourning ceremonies which saw a massive movement of people. This has resulted in 24 provinces being classed as red zones where there is a high circulation of the virus.

A spokesperson for the Ministry of Health said that the situation in Tehran, as the “crossroads of all exchanges” is getting worse and that in just one week there has been a 20 percent rise in the number of people that have been hospitalized.

Mrs. Maryam Rajavi the President-elect of the National Council of Resistance of Iran’s (NCRI): As the regime officials in Iran acknowledge that the entire country is red with respect to the pandemic, Khamenei says that it is the people who must do their duty in fighting the disease,adding salt to the injury of millions of bereaved and sick Iranians and their families Covid_19.