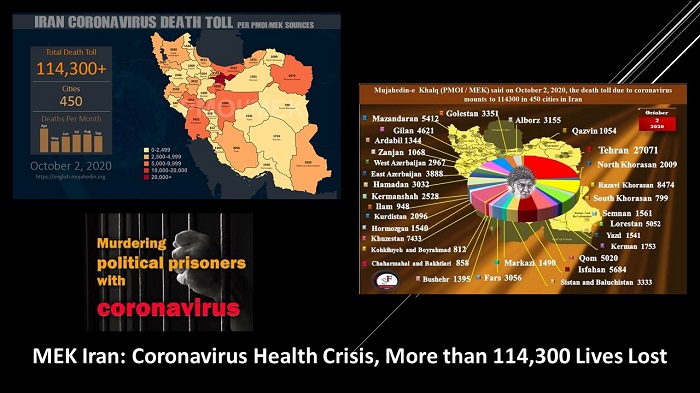 The main opposition to the Iranian regime – the People’s Mojahedin Organization of Iran (PMOI / MEK Iran) – has reported that more than 114,300 people have died in Iran after contracting COVID-19. The regime’s official death toll stands at just 26,567 – a mere fraction of the real figure.

The (PMOI / MEK Iran), has been keeping a close eye on the situation since the very beginning because it presumed, correctly as it turns out, that the regime would lie about the situation and cover up the crisis. The death toll in Tehran alone is 27,071 – a figure that is higher than what the regime is trying to say is for the whole country.

President-elect of three National Council of Resistance of #Iran (#NCRI) #MaryamRajavi expressed her sympathy to the victims of the coronavirus in Iran and condemned the Iranian regime for its inadequate response to the crisis. #MEK https://t.co/Vfwz08V91b pic.twitter.com/wI1vbqA51h

The Deputy Minister of Health said a few days ago (and has also said on numerous previous occasions) that of all the daily deaths in the country, between 19 and 20 percent of them are due to COVID-19. However, other information indicates that this is a lie. The director of the Tabriz Cemetery Organization has said that over the past few days there have been more deaths caused by Coronavirus than any other cause of death.

More than 114,300 people have died of the novel #coronavirus in 450 cities checkered across all of Iran's 31 provinces, according to the Iranian opposition PMOI/MEK.

Zahra Sheikhi, a Parliament Health Commission spokesperson said earlier this week that if there is no drastic action soon then the Coronavirus health crisis will spiral out of control. She said that the situation in Tehran – the worst-hit part of the country – is the index in the battle against the virus and that it is clear political decisions and vetoes are allowing the virus to spread further and faster. She also said that medical workers are once again being subjected to increased pressure.

The situation in Tehran is so critical that experts are warning that hospitals are going to be overrun again and medical workers will be put under unspeakable pressure. A member of the National Coronavirus Task Force warned earlier this week that if measures are not put in place immediately, hospital hallways will be packed with patients needing treatment.

Masoud Mardani also said that there has been a significant increase in the number of critically ill patients in Tehran and that medical centers are already working at full capacity. He added: “We should also expect Tehran, as the epicenter of the Covid-19 outbreak, to be shut down for a week.”

Over 114,300 people have died of the novel #coronavirus in 450 cities checkered across all of #Iran’s 31 provinces, according to reports tallied by the Iranian opposition PMOI/MEK as of Friday afternoon local time, October 2.https://t.co/fX9Q9Lx9OA

The situation is not just critical in Tehran – many areas of the country are also dealing with very dire circumstances.

The dean of Lorestan Medical Sciences University said at the beginning of the week that of approximately 750 tests being carried out every day, around half of them are coming back positive, showing that there is an extremely high circulation of the virus in the area. The dean said that the beds in intensive care units in the province are almost always completely occupied.

Khamenei & Rouhani do not pay the price to fight the #coronavirus. They exact the price from the lives & pockets of the people. Khamenei has usurped a trillion dollars’ wealth of the people & has refused to spend it for the minimum needs of the people& sends them to work #Iran

Several areas are experiencing their third peak and there are grave concerns about how the regime is going to act. So far it has failed to listen to experts and has denied the gravity of the situation. Its neglect and mismanagement are criminal.

the People’s Mojahedin Organization of Iran (PMOI / MEK Iran) believes that the Iranian people’s suffering will not end until the mullahs’ regime has been replaced with a free and democratic government.