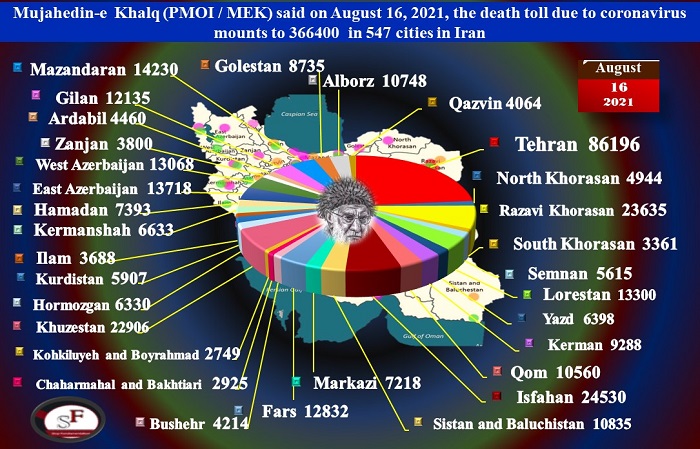 The Covid-19 crisis in Iran has reached a critical point and is worsening by the minute, with thousands of Iranians dying every day as a result of the regime’s inhumane Covid-19 policy.

“Iran ranked first in the world in terms of new cases with over 42,000 patients and second in terms of deaths yesterday. Official Iran daily said on August 12 that “medical centers in 31 provinces of the country are surrounded by patients infected with the delta coronavirus.”

Iran’s Covid-19 death toll has topped 366,400 people, according to the Iranian opposition group The People’s Mujahedin of Iran (PMOI / MEK Iran), and the National Council of Resistance of Iran (NCRI), as of Monday, August 16.

Deaths due to the disease are on the rise

“Deaths due to the disease are also on the rise. Medical staff reports indicate that hospitals are overburdened with people diagnosed with Covid-19 and that the rising number of deaths has made it difficult to transport bodies by ambulance.

The death tsunami struck the country’s major cities one by one. “All of the country’s hospitals are exploding, and death is swarming in them,” an Iranian daily admitted on Thursday.

Iran’s state media and authorities have acknowledged the crisis, as well as how the regime caused and exacerbated it.

“Despite the fact that the coronavirus arrived in the country in January 2020 as a result of Mahan Airlines flights to China, authorities only announced its presence in the last days of February 2020.

If we look at the authorities’ activities from that day on, we can see that they not only did not take the coronavirus threat seriously at first but also tried to normalize it,” the state-run Setar-e Sobh daily wrote on August 14.

The pandemic was revealed by the Iranian Resistance

Documents collected from the National Emergency Organization at the start of the pandemic were revealed by the Iranian Resistance.

These documents demonstrate that “by late January, several infected individuals had been identified in Tehran, and the regime had allocated certain hospitals such as Massih Daneshvar, Yaftabad, and Khomeini to deal with these patients,” according to the Iranian Resistance.

The government did everything they could to keep any information about these cases from getting out,” as per Setar-e Sobh.

The death toll was kept hidden from the World Health Organization

According to the state-run Hamshahri daily on August 12, Alireza Zali, chairman of the Tehran Covid-19 Task Force, claimed, “We rejected international aid and Médecins Sans Frontières without having much knowledge about the virus and did not seek international advice.”

“We have much more bitter news for the coming weeks, and things will get much worse,” Zali warned. “In India, the Covid-19 Delta version spread swiftly and lasted three months; everyone was quickly vaccinated.”

The Covid-19 crisis in Iran

The Covid-19 crisis in Iran may have been avoided by now if the regime’s Supreme Leader, Ali Khamenei, had not banned vaccines in early 2021 and kept the public in the dark about the situation. Officials from the dictatorship refused to declare a nationwide lockdown, and when they did, they refused to provide financial support, pushing people back to work.

Following huge protests in November 2019 that endangered the regime’s survival, Khamenei and his administration employed the Covid-19 to maintain control over Iran’s restive people. The dictatorship no longer has control of the situation, and it will soon witness the implications of sending people to the Covid-19 minefields.