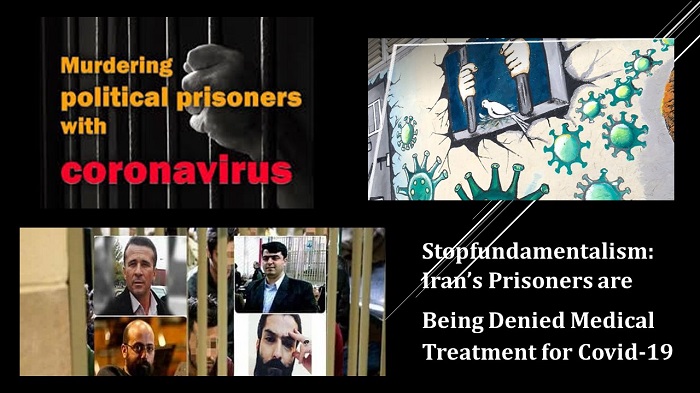 Several prisoners on Ward 4 of Tehran’s Evin prison have become infected with coronavirus because of dire conditions that make it easier for diseases to spread.

Over 159,000 people have died of the coronavirus in Iran, according to reports by the Iranian opposition,  The People’s Mojahedin Organization of Iran (PMOI / MEK Iran), and the National Council of Resistance of Iran’s (NCRI).

More than 159,000 people have died of the novel #coronavirus in 465 cities checkered across all of Iran's 31 provinces, according to the Iranian opposition PMOI/MEK.

At least four prisoners tested positive, but many displaying symptoms have not been tested and are not being quarantined, which is putting more prisoners at risk of infection and death.

One of those who tested positive is Gholamreza Abanlu, who was arrested in 2019 for supporting the Iranian opposition group, the People’s Mojahedin Organization of Iran (PMOI / MEK Iran). He was diagnosed at least ten days ago, but authorities returned him to the ward with healthy inmates without any kind of medical care or even being told of his diagnosis.

Meanwhile, political prisoner Loghman Aminpour, 29, is experiencing several coronavirus symptoms, including breathing difficulties, fever, and more. Aminpour, who is also imprisoned for “support for the (PMOI / MEK Iran)” and “propaganda against the state”, is being denied medical treatment too.

According to reports obtained from #Iran's notorious Evin prison, severe cold and lack of access to heaters in Ward 4 has made several prisoners sick. Coronavirus has spread among inmates in Ward 4.#HumanRightshttps://t.co/IIFFB134Ya

Following a protest, the prison’s medical facility reportedly told prisoners they would not be tested for coronavirus because it would come back positive, so to go back to their ward.

The main problem on the ward is severe cold, amplified by the authorities’ refusal to provide working heaters, which is preventing prisoners from getting much sleep. The inmates protested, but the authorities told them there is no way to fix them. Of course, if that were true, the regime would still be obligated under international law to replace them.

As we know, cold and lack of sleep both lower immune systems and increase the spread of the virus and the flu.

Regime officials have also increased pressure on prisoners in various cities across #Iran. Inmates in the Greater Tehran Penitentiary (GTP) are suffering from food shortages and starvation.#HumanRightshttps://t.co/1djMuUqbmn

In a related matter, the prisoners on Section 2 of the Greater Tehran Penitentiary are being tortured through starvation, with prisoners only getting 8-12 spoonfuls of mostly rotten rice per day. The regime defended this, saying that prisoners could buy more from the shop, but the food there is just as rotten and exorbitantly overpriced. The prisoners were the breadwinners of their families, so their relatives cannot even buy the stuff.

The prisoners there are also deprived of warm water, meaning they have to bathe in cold water, and medical treatment, while they too face the threat of coronavirus and the flu.

Dastgerd prison in Isfahan also saw a spike in coronavirus cases last month because authorities were not treating patients or containing the disease, while Vakilabad prison in Mashhad saw several coronavirus deaths in the same time frame.

The tragic truth is that this is common torture used by the regime against political prisoners, particularly (PMOI / MEK Iran) supporters.

Mrs. Maryam Rajavi the President-elect of the National Council of Resistance of Iran’s (NCRI): Many prisoners including political prisoners of Evin Prison, Great Tehran Penitentiary, the Central Prison of Urmia, among others, have contracted the coronavirus and so, thousands of prisoners in Iran are vulnerable to the disease.