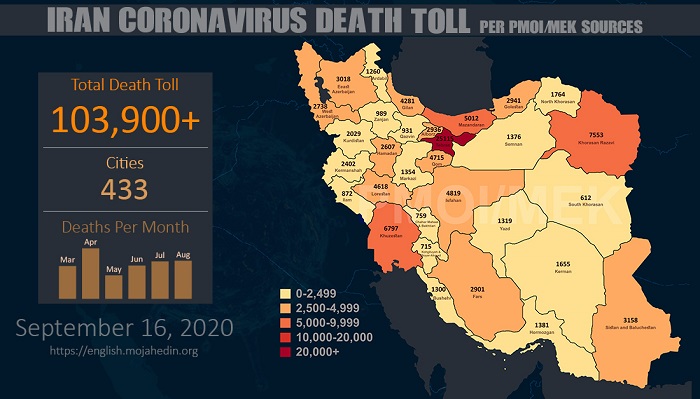 According to information made available to the Iranian opposition, The People’s Mojahedin Organization of Iran (PMOI / MEK Iran), 103,900 have lost their lives to COVID-19. These deaths have occurred in 433 cities in Iran’s 31 provinces. This contradicts the inaccuracies released by the regime indicating that the official deaths were just 23,632.

Over 103,900 people have died of the novel #coronavirus in 433 cities checkered across all of #Iran’s 31 provinces, according to reports tallied by the Iranian opposition PMOI/MEK as of Wednesday afternoon local time, September 16.https://t.co/HxX0RSL6D5

These are the deaths in several provinces but not all:

The regime’s Health Ministry’s spokesperson revealed that the number of COVID-19 cases was growing. He said in Tehran when comparing the previous two weeks with one another, the number of new cases each day has leaped from 900 to 1,800. Along with this, the number in hospital has doubled. A similar trend is occurring in other provinces.

Alireza Zali, head of the Tehran Covid-19 Task Force, says he believes Tehran is about to go through a 3rd wave of the virus. This means it is going to be in the dangerous red zone.

The suggestion is now that restrictions be imposed again and employees should work at home. Hamshahri, a state-run daily, said that there are 143 patients currently in ICU in Tehran province.

The Dean of Qom Medical Sciences University said the city is in the red zone and the ICU is now full. There is fear that the medical staff will no longer be able to cope. He said all group gatherings must be stopped immediately.

In Isfahan, the local Medical Sciences University spokesperson said the Covid-19 spread in this province is still taking place. The words he spoke were, “the number of positive Covid-19 cases in one day this week in medical centers covered by this institution was nearly one-third of the total number announced for the entire country.”

In Bushehr province, the health ministry spokesperson said that in the last week there had been a 36% rise in cases. He also reported that the death numbers and those in the hospital exceeded the national average.

Mrs. Maryam Rajavi, the president-elect of the National Council of Resistance of Iran (NCRI) made the point that the rise in cases of COVID-19 is due to “the criminal policies of regime supreme leader Ali Khamenei and regime president Hassan Rouhani.” One of the worst policies was opening schools again while the other was allowing crowds to get together for mourning ceremonies throughout the month of Muharram.

The regime’s criminal rulers in #Iran on the one hand order the schools to open without having the minimum hygienic and preventive preparations, and on the other, sanction religious gatherings in the month of Muharram. #COVID19 pic.twitter.com/TSuDawugCN