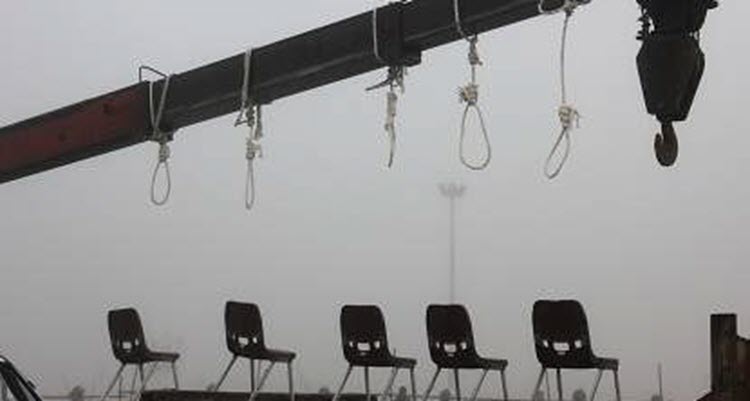 In August, between 20 and 25 Sunni prisoners were killed in a massive mass hanging. Of course many people and organisations came forward to say that this was an appalling abuse of human rights. Yet, to make matters even worse, Iranian state television has been broadcasting video clips of the prisoners being coerced into confessions.

The video clips appear to be a warning to the Shiite population in Iran.

Amnesty International issued a report on this subject on Wednesday. “Broadcasting Injustice, Boasting of Mass Killing” states that the Iranian regime is stage-managing confessions to justify the mass executions. They added that confessions are forced from prisoners for crimes that were committed during their incarceration.

Philip Luther, Amnesty International’s research and advocacy director for the Middle East and North Africa, said: “By parading death row prisoners on national TV, the authorities are blatantly attempting to convince the public of their ‘guilt,’ but they cannot mask the disturbing truth that the executed men were convicted of vague and broadly defined offenses and sentenced to death after grossly unfair trials.”

Iran is the world leader when it comes to using the death penalty and even uses it for crimes such as drug use. Human rights groups have been saying for a long time that the Iranian regime uses torture to force confessions.

Sarah Leah Whitson, the Middle East director at Human Rights Watch, said: “It seems Iran has joined the region’s propaganda industry, producing slick videos featuring the apparently forced confessions of men they later executed as ‘terrorists,’ bizarrely interspersed with scary videos of Islamic State attacks they had nothing to do with.”

The New York Times published an article about the situation, saying that the Amnesty International report highlighted several inconsistencies in the videos which point to the confessions being scripted. “In some cases, the men are linked to crimes that occurred months after they had been arrested or the nature of their involvement in the crimes attributed to them change massively from one video to another.”

Sunjeev Bery, the advocacy director for the Middle East and North Africa at Amnesty International’s Washington office, said: “The Iranian government is sensitive to global public concern. Like many governments, Iranian officials may attempt to portray themselves as impervious to international criticism, but it can lead to many costs.”