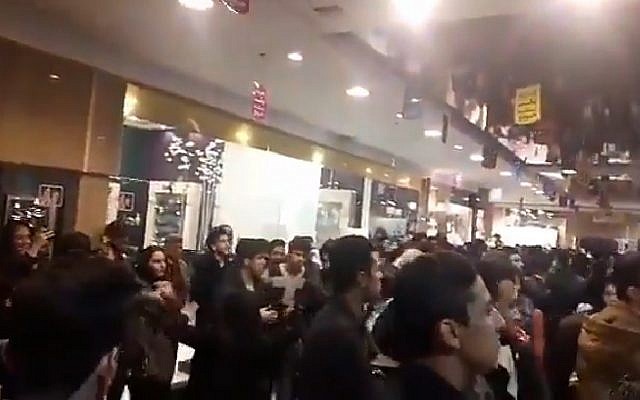 by Atousa Pilger
On April 19th, deputy prosecutor Hassan Heydari told the judiciary’s Mizan Online news agency that the head of the department of Islamic guidance in the holy city of Mashhad had been arrested for “undermining public decency and disrespecting the laws.”
The official was arrested on Thursday after a video showing young boys and girls dancing in public was posted online. The event took place on Tuesday. The boys and girls were innocently dancing in a shopping mall, where a singer was performing for a huge crowd.

The Islamic law that is enforced in Iran prohibits the mingling of unrelated men and women, as well as public dancing. It seems unimaginable that in the 21st century, people continue to be punished for such “crimes” as dancing.

Spokesman for the shopping center, Mohsen Afshar, told the semi-official ISNA news agency that a monthly draw is organized and a car given away to the lucky winner to attract customers. He added that the singer had the necessary “official permits to perform.”
He said that the performance can attract some 10,000 to 12,000 people, including “some individuals whose behavior is contrary to the norms of the Islamic republic.” It is difficult to believe that these “norms” can infringe so heavily on the slightest social freedom.
According to Tasnim news agency, Heydari claimed that the mall was not authorized to organize such events.
Mashhad is a very conservative city. In fact, in 2016 concerts were banned. On August 12th of that year, Friday prayer leader, the ultra-conservative and outspoken Ayatollah Ahmad Allamolhoda, who is a representative of supreme leader Ali Khamenei in Khorasan Razavi province, spoke out in a sermon. “Mashhad [the seat of the shrine of Imam Reza, the eighth Shia imam] is a pilgrimage destination. … If you want a concert, go and live somewhere else,” he declared.

Thursday’s arrest comes days after Tehran’s reformist mayor, Mohammad Ali Najafi, resigned for a second time.
Previously, on March 14th, Mr. Najafi handed in his resignation citing medical reasons. “What forced me to hand in my resignation from the City Council was my poor medical condition,” Najafi said, adding that he is undergoing treatment. City Council members rejected his resignation at that time, but on Monday, councilors agreed with it unanimously.
Last month, hard-liners criticized Najafi after he attended a show at City Hall where schoolgirls performed a traditional dance for Iranian Women’s Day.