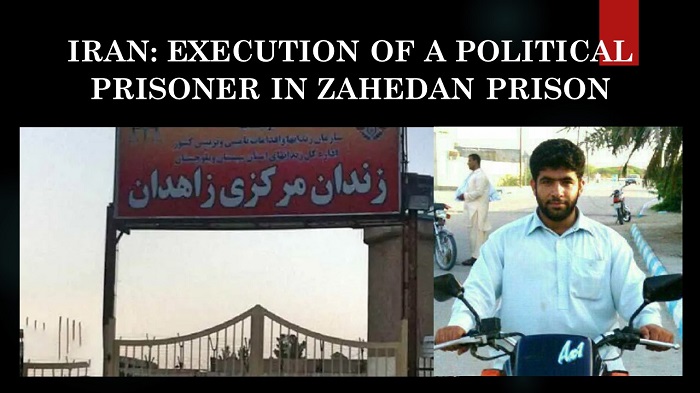 Abdolhamid Mir-Baluchzehi was arrested on November 29, 2015. On May 30, 2017, he was sentenced to 15 years in prison. But the Supreme Court annulled this verdict and he was sentenced to death after re-examination of his case. He was accused of “acting against national security and waging war on God” for allegedly murdering two IRGC guards.

However, he was executed by the regime’s judiciary after the Revolutionary Guards’ (IRGC) intervened. This hanging took place on the anniversary of the December 27, 2009 uprising, which shook the clerical regime to its core.

Baluchi political prisoner Abdolhamid Mir-Baluchzehi was “repeatedly denied their charges. They said they were severely tortured after being arrested. For example, they were forced naked, flogged, humiliated, and insulted.”

Three Others in Imminent Danger of Execution

Three more political prisoners in Zahedan’s central prison are in imminent danger of execution, according to reports from the province.

Three other imprisoned Baloch compatriots are also in danger of execution on charges of “moharebeh” (waging war against God). One of the three detainee’s cases is related to Mir-Baluch Zehi.

Iranian opposition, (NCRI) and (PMOI / MEK Iran), strongly condemn this brutal murder as an extra-judicial execution because a person who had already been sentenced to prison has been hanged.

(PMOI / MEK Iran) and (NCRI) urges the United Nations Secretary-General, the UN High Commissioner for Human Rights, and the Human Rights Council, as well as other human rights organizations to condemn this barbaric execution and to take urgent action to rescue the death row prisoners in Iran.

Iranian resistance, (PMOI / MEK Iran) also reiterates the need to establish an international commission of inquiry to visit Iran’s prisons and meet with prisoners, especially those in Sistan and Baluchestan prisons.

(#NCRI) and (#PMOI /#MEK #Iran), also reiterates the need to establish an international commission of inquiry to visit Iran’s prisons and meet with prisoners, especially those in Sistan and Baluchestan prisons. #WeStand4FreeIran pic.twitter.com/VjNl33Prte

Ensaf News reported that attorney Mohammad Reza Faghihi said; that the death sentences against five prisoners were going to be enforced without prior notice from the judiciary.

Mizan reported that two prisoners convicted of armed drug trafficking had been executed in Zahedan.

Mullah’s regime’s human rights dossier must be referred to the UN Security Council, and its leaders must be brought to justice for four decades of crimes against humanity.

In addition to Abdol-Hamid Mir-Baluch Zehi, 2 other prisoners were also executed in the morning of Dec. 26, in the Central Prison of Zahedan.