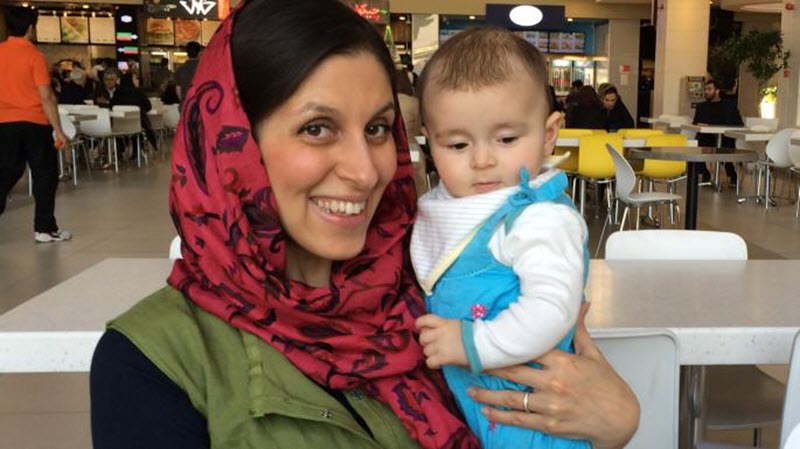 British woman Nazanin Zaghari-Ratcliffe, a charity worker who was arrested by Iranian authorities during a visit to her family in Iran, remains in jail. She was arrested and imprisoned in April last year. Her daughter was with her on the trip and Nazanin was arrested and separated from Gabriella who has been cared for by her maternal grandparents ever since.

Nazanin was recently accused by the Iranian authorities of recruiting for the BBC’s Persian service (which is banned in Iran) and there are now fears that she will be handed an additional sentence of 16 years to serve on top of her original five-year sentence.

There was a lot of ambiguity surrounding her arrest and her family had no idea why she was arrested last year. The authorities eventually accused her of partaking in plans regarding a “soft toppling” of the Iranian government.

Her husband has been campaigning for her release and is urging the British government to take more action. Richard Ratcliffe has not seen his daughter since they left for Iran more than 18 months ago. Gabriella has spent this whole time in a Farsi-speaking environment and she has now lost most of her English minus a few words.

Gabriella, now three years old, has heartbreakingly said that instead of gifts at Christmas, she just wants to be reunited with her mummy and daddy back at home.

Last month, several British politicians spoke publicly about her case. British Foreign Secretary Boris Johnson made a comment that she was simply in Iran to teach journalists. This is despite the fact that Nazanin and her family maintain that she was there on holiday. Although Boris Johnson retracted his comment, the Iranian authorities picked up on the remarks and used this as further evidence that she was not on holiday in Iran at the time of her arrest.

Politicians and personalities called on the Foreign Secretary to resign or for him to be sacked. Making such comments put Nazanin at high risk for further torture and they will probably be very detrimental to her case. Her employer, the Thomson Reuters Foundation, urged Johnson to correct the “serious mistake” he made.

Oscar winning actress Emma Thompson who is currently suffering from pneumonia participated in a march organised by Nazanin’s supporters. She called on the government to take more action so that Nazanin can return home to her family as soon as possible. She said that Johnson should “get on a plane” and go to the country. “We are a net of compassion and love for Nazanin and her family. This is what we human beings do best in stark contrast to the bunch of angry molecules bumping around in Westminster. If I can get out of bed with pneumonia to support a horribly abused member of our community then our foreign secretary can get on a plane and go to Iran and deal with the problem he’s so seriously exacerbated.”

Also at the march was MP Tulip Siddiq who said that she had spoken to Nazanin in prison and there are indications that action is being taken by the government. One can only hope that Mr Ratcliffe’s dream of being reunited with his family by Christmas will come true.