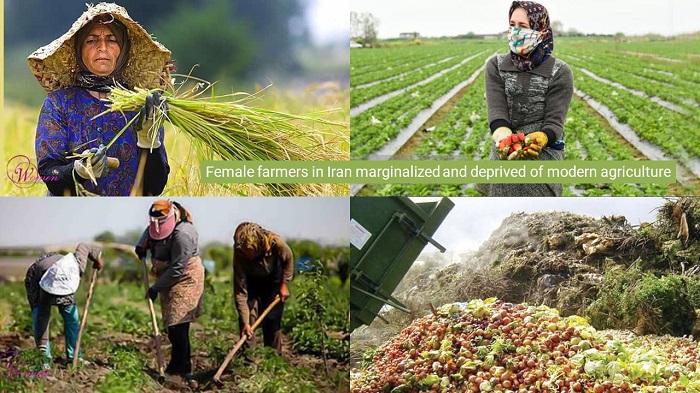 In Iran, female farmers are critical to the economy and agricultural production, as well as the rural labor and food security, according to the Iranian opposition, The National Council of Resistance of Iran (NCRI), and the People’s Mujahedin of Iran (PMOI / MEK Iran).

In Iran, women are responsible for 70% of all farming activities. Despite the fact that using rural women’s potential is critical for enhancing development and productivity, their work, according to the state-run ILNA news agency, on October 22 practically goes invisible as “women’s share of agricultural paid work is only 11%.”

Agriculture employs a big portion of the female population. However, because the majority of women work on family estates or on informal contracts, they are either absent or underrepresented in census and employment data.

Zarrin Assadi works in a village in the southwestern Iranian provinces of Kohgiluyeh and Boyer Ahmad. “Many female farmers head their household but do not have a decent financial situation.

They do anything from picking lemons and corns to harvesting wheat and planting rice. Our job is demanding and our wages little.

We need jobs and will not complain about conditions

Employers, often non-native, welcome our workforce because they know we need jobs and will not complain about conditions. Employers do not pay little to men because they know that men will go to another village for work if they do so.

In addition, extensive corruption among regime officials and their associates, plunder of public property, and economic mismanagement have resulted in numerous crises in Iran.

Floods, droughts, and earthquakes have wreaked havoc on many farmlands as a result of environmental degradation. Even farmers who are able to overcome these obstacles and bring their goods to market confront a more serious issue known as the market. There is no one to buy the farmers’ crops at a price that favors them because of Iran’s dismal economic state.

According to Massoud Latifian, the Plant Organization’s deputy for pest control, in an interview with state-run ILNA on August 18, “Iran produces an average of 100 million tonnes of diverse agricultural goods each year. Approximately 16.5 million tonnes are, however, thrown as waste.”

The lower classes, such as villagers, take the burden of the religious authorities’ corruption and pillage, more than anybody else. Rural women and female farmers experience double oppression as a result of their rural status and their gender.

Rural women have suffered enormous losses as a result of the religious regime’s restriction of women’s agricultural ability and failure to provide them with support in the face of floods and the pandemic, as well as inflation and the high cost of tools and raw materials. They are unprotected and have no job security in the agricultural and allied industries.