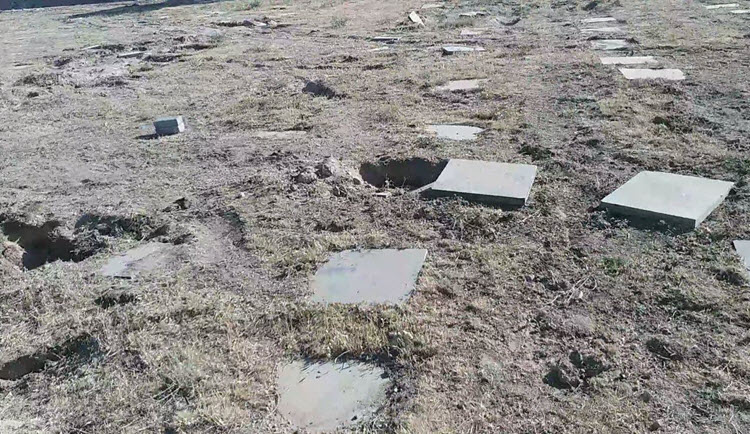 In Tabriz, in the north-western part of the country, graves of members of the People’s Mojahedin Organization of Iran (PMOI/MEK) that were executed by the Iranian regime during the eighties have been vandalised. Many of the victims were those who were killed during the 1988 massacre in which more than 30,000 political prisoners, most of whom were members of the PMOI, were killed following a fatwa issued by the then-Supreme Leader.

It has been reported that the vandalism of the graves is being carried out by the Iranian regime and its security and intelligence agents.

Graves in the Rahmat Valley Cemetery have been destroyed, some 75 of them belonging to martyrs such as Akbar Choopani. The grave of Soraya Abolfat’hi was vandalised too. She was pregnant when she was executed.

The National Council of Resistance of Iran (NCRI) said that intelligence agents of the Iranian regime poured around 10 centimetres of cement over the grounds of the cemetery. They are doing this to level the ground and this cover up evidence of the martyrs that are buried there.

The NCRI also reported that a sign has been put up mentioning that the children’s block is being levelled so that it looks like work is being done and so it does not look like they are destroying the graves.

In the city of Mashhad in the northeast area of the country, there were also reports of graves of PMOI martyrs that were vandalised.

The same is set to happen in Ahvaz in the southwest of Iran where the local council has been overseeing the widening of a road near the cemetery so that more graves can be destroyed.

The NCRI said: “Signs of tumbled bodies in a mass grave previously covered with cement were seen as the digging began in the area of phase 2 of Padadshahr and the Bankdar Boulevard in this city. Authorities quickly covered the mass grave with dirt and continued to widen the road.”

The Iranian Resistance made a call to all international human rights organizations, in particular the United Nations High Commissioner for Human Rights and the Special Rapporteur of the Human Rights Situation in Iran, to condemn the Iranian authorities for this act of inhumanity. They urged the organisations to take immediate action so that no more graves are covered and to prevent the Iranian regime from destroying even more evidence of its crime against humanity in the mass execution of political prisoners.

They added that the people responsible for the crimes against humanity and those involved in trying to cover these crimes up must be brought to justice.