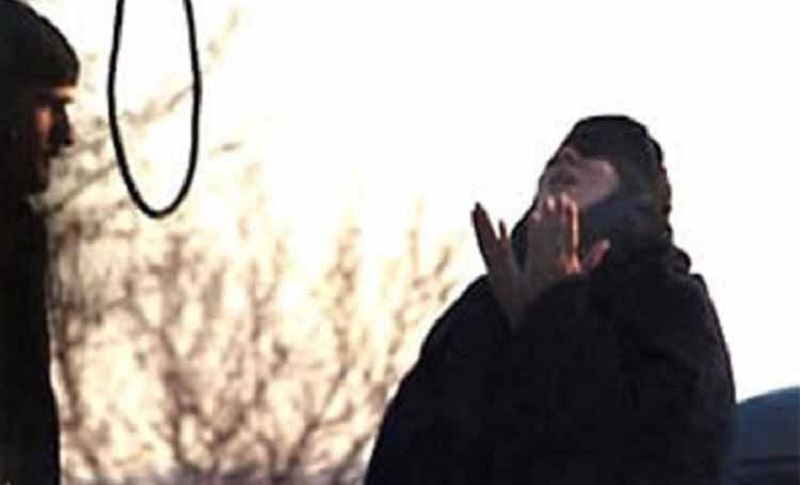 An eyewitness said she had been taken to be hanged at Gohardasht Prison from either Shahr-e Ray (Qarchak) or Kachouii Prison.

It should be noted that anyone who commits murder in Iran is sentenced to death, regardless of their intention or reason, because the Regime refuses to categorize murders according to their degrees (i.e. murder in the first degree). Many of the women convicted of murder in Iran are victims of domestic violence and acted in self-defense, defense of a third person (i.e. a child), or, in the case that there was no imminent danger, they may have snapped after years of abuse.

Over the span of two days, ending on September 26, the Iranian Regime executed at least 12 prisoners including two women, although the Iranian state media has not announced the news of any of these executions. The other woman executed was identified as Leila Zarafshan who was executed in the Central Prison of Sanandaj. Zarafshan was also convicted of murdering her husband.

Taking these most recent executions into account, there have now been 96 women executed during the tenure of President Hassan Rouhani; eight of which have hanged in a period of just three months. In 2018, just six women were executed in the whole year, with that figure being lower than the ten women executed during 2017 and the nine executed during 2016. For reference, Rouhani took office in 2013 and at least 3800 people have been executed during Rouhani’s reign. Most of these have taken place in secret to try and prevent the Iranian people from rising up.

Leila Zarafshan was hanged this morning in Central Prison of Sanandaj
With execution of Leila Zarafshan, the number of #women executed during Rouhani’s presidency reaches 95. 7 women have been executed only in a 3-month period since beg. of summer#Iranhttps://t.co/KkhGRkKCBL

In August, a 38-year-old woman was executed at Mashhad Central Prison, while four women were executed in a period of just eight days in July.

The Iranian Regime is the world record holder in executions per capita, largely because the mullahs deploy the death penalty as a tool to ensure they keep their shaky grasp on power.

They use it to silence a disgruntled populace, most of whom live under the poverty line, and the frequency and the total number of executions have increased over the past month.

This is no doubt a sign of how scared the Regime is by the increasing protests by the Iranian people in their ongoing anti-regime uprising.