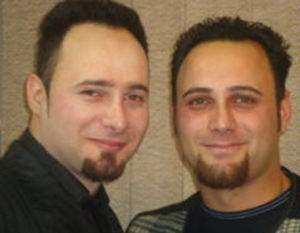 Stop Fundamentalism, May 18, 2011 – The Iranian regime hanged two political prisoners, Mohammad and Abdullah Fathi, 27 and 28 years old, Tuesday May 17 on charges of Moharebeh.  The two were brothers.

The execution was carriedout in Isfahan’s Dastgerd prison early in the morning.

Moharebe is a political allegation meaning waging war on God.  Thousands of political prisoners have been executed in Iran for Moharebeh since the Iranian regime came to power 1979.  The 1988 massacre claimed the lives of 30,000 political prisoners.

Their father said that the two, “suffered the same fate as those who were executed for visiting their family members in Camp Ashraf in Iraq.” He was himself a political prisoner during the 80’s along with his brother.

The Iranian regime has executed 32 people during the past ten days all by hanging and some in public.  In one incedent, 9 persons were hanged in the southern city of Ahwaz were the majority of population are Arabic speaking.

According to online reports just before the execution, a group of people gathered at the prisongate calling for cancelation of the execution order but they were told that the execution will not be carriedout.

Mahvash Fathi, Mohammad and Abdullah’s mother, told reportersthat her sons asked her to tell everyone not to greave for them but protest the in justic.