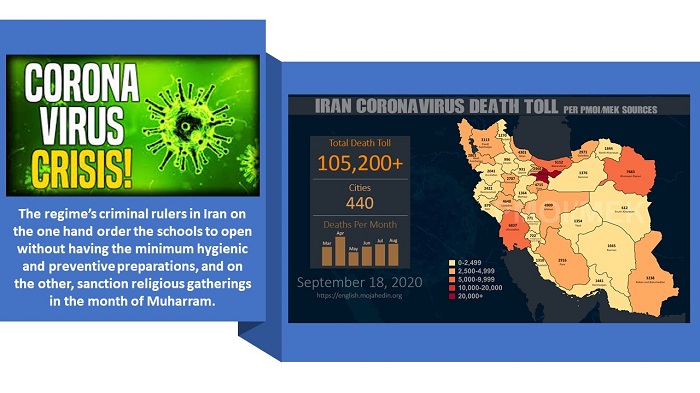 The Iranian regime has reported that 23,952 people have died after contracting Coronavirus in the country. However, this figure is nowhere near the one reported by the People’s Mojahedin Organization of Iran (PMOI / MEK Iran) that has been monitoring the situation very closely since the very beginning of the outbreak.

According to the MEK, as of Friday 18th September, the death toll stands at around 23,952 – approximately five times less than what the regime is reporting.

The leaders of Iran have mismanaged the situation since the very beginning. It failed to take appropriate and timely action, despite Iran having the advantage of being able to see the countries that were weeks ahead of Iran in the pandemic. The regime could have taken note of the mistakes that foreign countries made and ensured that better action was taken in Iran.

President Hassan Rouhani has said on numerous occasions since the beginning of the pandemic that Iran has done extremely well, stating that many other countries have done much worse than Iran. However, this is not the case. Comparing the way Iran has dealt with the health crisis to that of European nations is foolish. No European country has a higher death toll than Iran.

More than 105,200 people have died of the novel #coronavirus in 440 cities checkered across all of #Iran's 31 provinces, according to the Iranian opposition PMOI/MEK. pic.twitter.com/KESSeLKBhk

Yesterday the President reiterated these comments, saying that Iran has “not been behind advanced countries regarding our stats”. If we look at Iran’s false statistics this may be the case. Yet looking at the more reliable and realistic statistics from the (PMOI / MEK Iran), there is no way anyone could argue that Iran has done better.

A spokesperson for the Ministry of Health also spoke yesterday, explaining that there is an increasing number of cities classed as red areas where there is a high circulation of the virus.

The head of the Coronavirus Task Force in Tehran said that the number of people needing hospitalization is increasing. In Tehran, there were 720 people in the hospital for treatment, with 147 needing to be placed in the Intensive Care Units (ICU). Alireza Zali said that the third wave has started and that the city of Tehran, over the coming weeks, is going to see a further increase in the number of people needing to be admitted to the hospital.

A senior official in one of Tehran’s hospitals said that if the trend continues in the same way, by November there will be 600 daily deaths. He described the current situation as a “catastrophe”.

Students have returned to schools and universities and there have been numerous reported cases in education establishments. Children are contracting the virus at school and then exposing it to their families at home. It is a vicious circle that is set to continue for the foreseeable future.

A state-run publication also said yesterday that the situation in Iran is especially worrying because “the rate of spread and death in Iran is higher than the global average”. It also pointed out that the government’s recommendations change so frequently that people do not know what to do, for example in terms of working at home or returning to the workplace.

Mrs. Maryam Rajavi the President-elect of the National Council of Resistance of Iran’s (NCRI): The rising number of coronavirus cases before the outbreak of the flu epidemic in Autumn, is a product of the criminal policies of Khamenei and Rouhani.

The regime’s criminal rulers in Iran on the one hand order the schools to open without having the minimum hygienic and preventive preparations, and on the other, sanction religious gatherings in the month of Muharram.

The regime’s criminal rulers in #Iran on the one hand order the schools to open without having the minimum hygienic and preventive preparations, and on the other, sanction religious gatherings in the month of Muharram. #COVID19 pic.twitter.com/TSuDawugCN