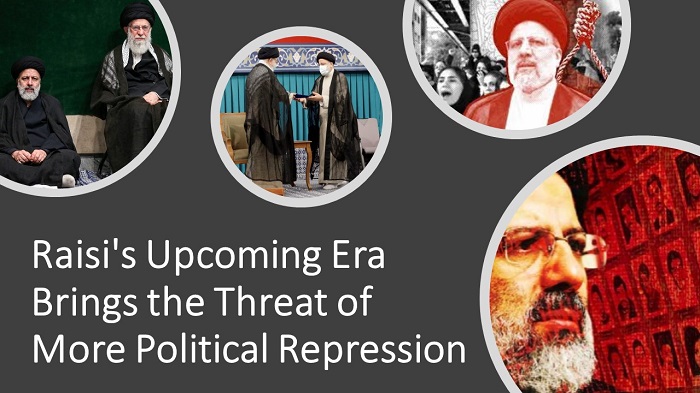 On August 5, Ebrahim Raisi was sworn in as the next president, following the conclusion of more than 30 years of impunity for him and the system as a whole.

Raisi was one of four figures in charge of a massacre

Raisi was one of four figures in charge of a massacre of political prisoners that lasted three months and claimed at least 30,000 lives in 1988 while working as Tehran’s deputy prosecutor.

Several legal scholars have labeled this tragedy one of the worst crimes against humanity of the late twentieth century, with many claiming that it meets the criteria for being tried as genocide. Despite the fact that no one has ever been held accountable for the atrocities, the dictatorship has been encouraged to reward the offenders with increasingly powerful and influential positions.

Khamenei played a key role in the massacre in 1988

Ali Khamenei, the Supreme Leader, was the regime’s president at the time of the massacre in 1988, and thus played a key role in its execution and cover-up.

Raisi’s presidency would now represent even another step forward in the regime’s impunity. As a result, it is critical for the international community to deny Raisi legitimacy on the international scene by refusing to allow him to attend the United Nations General Assembly and denying him access to nations where he wishes to undertake state visits.

In his remarks at the conference, Geoffrey Robertson, a human rights attorney from the United Kingdom, said that “there is an international convention which binds the countries of the world… to take action” over crimes that amount to genocide.

He went on to explain that similar action might be taken at the International Criminal Court as a result of a UN Security Council resolution, but that such a resolution could be vetoed by Russia or China.

As a result, according to Robertson, the gravity of the crime should be established beyond a shadow of a doubt through a formal international investigation, either to overcome political opposition to a resolution or to prepare the ground for Western powers to pursue accountability through more unilateral means.

In his remarks at a conference of the National Council of Resistance of Iran (NCRI), Eric David, a professor of international law at the University of Brussels, stressed the legal underpinning for such unilateral action.

He explained, “If a current Iranian regime official finds himself in any state on the planet… the prosecutor of that state can [lawfully] indict this person for the crimes committed in 1988,” citing the established principle of “universal jurisdiction” in cases involving the most serious international crimes.

Any crime against humanity, but none more so than genocide, may warrant the application of that concept. As a result, no one is a better subject for that principle than Ebrahim Raisi.

The language in the fatwa

The language in the fatwa and accompanying documents made it clear that the People’s Mujahedin of Iran (PMOI / MEK Iran)had been targeted for religious reasons, as part of the regime’s effort to wipe out a brand of Islam that conflicted with its own fundamentalism and theocratic mission, according to both Robertson and David at last month’s conference.

The definition of article 2 of the 1948 Genocide Convention

“These people were murdered because they practiced a religion,” David explained. “They were thought to be apostates. As a result, it precisely matches the definition of article 2 of the 1948 Genocide Convention, which Robertson cited as requiring the international community to take action to hold offenders accountable.

Leading world powers can approach this obligation in a variety of ways, but unless they are committed to arresting Raisi and putting him on trial under universal jurisdiction, their first step should be to deny him legitimacy on the international stage while pushing for a formal commission of inquiry into the 1988 massacre and his role as a precursor to international prosecution.