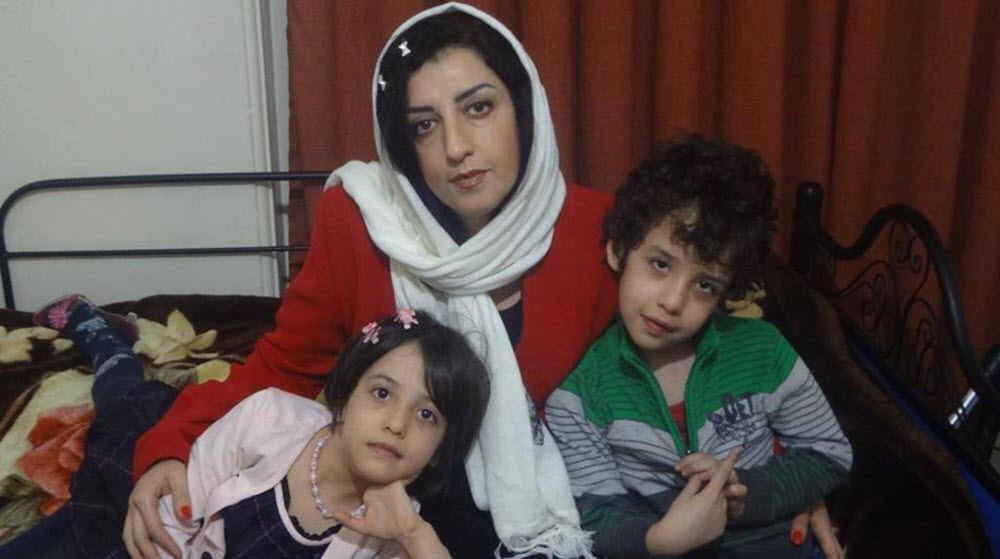 Celebrating her children’s birthday in prison for the third year in a row, political prisoner and deputy of Defenders of Human Rights Center in Iran, Narges Mohammadi, lit a candle.

She wrote in an open letter, “I do not have a real and clear image of my twins, anymore.” Ms. Mohammadi’s twins, Ali and Kiana, have been living in exile in Paris along with their father, Taqi Rahmani, since 2014. Her contact with them has been limited to phone calls.

Ms. Mohammadi, a prominent defender of human rights, who won the 2011 Per Anger Prize for defending human rights in Iran, was first arrested in 2009 and sentenced to 11 years in prison on charges of “assembly and collusion against national security,” as well as “membership in the Defenders of Human Rights Center,” and “propaganda against the state.”

Her sentence was reduced to six years on appeal, and she was released from Zanjan Prison in 2013 on medical grounds, but was arrested again on May 5, 2015.

Ms. Mohammadi then met with Catherine Ashton, the European Union’s foreign policy chief at the time, at the Austrian Embassy in Tehran to discuss the situation of human rights in Iran, according to Center for Human Rights in Iran (CHRI). Two months later, Branch 26 of the Tehran Appeals Court upheld a 16-year prison sentence for “membership in the [now banned] Defenders of Human Rights Center,” and “assembly and collusion against national security.” She was also sentenced to an additional year for “propaganda against the state.” Ms. Mohammadi will be eligible for release after serving 10 years in prison.

Nobel Peace Prize laureate, Shirin Ebadi who was the first Iranian and first Muslim woman to receive that honor, established the Defenders of Human Rights Center. Ms. Ebadi has been living in the UK, in exile since June 2009, after her life was threatened.

Ms. Mohammadi, who has a degree in solid-state physics, has jointly won the prestigious biannual Sakharov Prize (2017-2018) along with Indian researcher Ravi Kuchimanchi. The ceremonies for awarding the Sakharov Prize are scheduled to be held in Los Angeles, California from March 5 to 9, 2018. Several members of American Physical Society (APS) are attempting to launch a campaign that calls on the Islamic Republic of Iran to free Narges Mohammadi to receive her prize in person.

Ms. Mohammadi urged Hassan Rouhani, after his second-term victory, to build the foundations for civil society in Iran. “As a citizen who voted for you, I should and will be insistent on seeking my demands,” she noted, adding “I am an imprisoned civil rights activist, but I am not asking you to free me. I want to see [the dream for] a civil society come true. That is my demand.”

Rouhani has not responded to the letter.