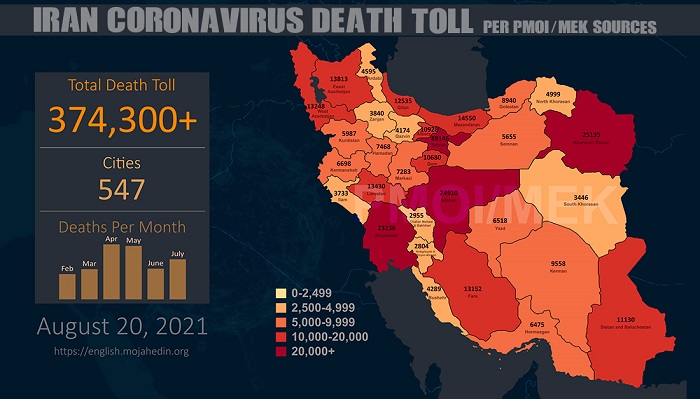 With the escalating number of coronavirus deaths, the Iranian regime’s abusive behavior is coming to light. Covid-19 had provided an opportunity and blessing for Iranian regime supreme leader Ali Khamenei to briefly halt the rising storm of widespread popular protests prior to the appearance of the delta variant.

Ali Khamenei is guilty of a heinous crime

The extent of corruption and crime does not end with one or a few regime officials, as different government officials have stated. All factors point to Ali Khamenei being guilty of a heinous crime against the Iranian people.

The dictatorship to murder Iranians

Any social issue can swiftly turn into a political crisis for the regime during this time, and the situation on the ground can pose a serious threat to the system.

The coronavirus, which was utilized by the dictatorship to murder Iranians, is now the source of rising popular dissatisfaction.

The Iranian opposition The National Council of Resistance of Iran (NCRI), and the People’s Mujahedin of Iran (PMOI / MEK Iran) have made it impossible to hide the genuine number of covid fatalities with its daily disclosure of the actual death toll. According to their latest report, the coronavirus fatalities in 547 cities had exceeded 374,300.

The US and UK are not permitted in the country

“The issue is temporary and not an extraordinary one. Of course, I do not say that the issue is too small. However, we should not make a big fuss about Covid-19. This will be here a short while, and then it will disappear,” Khamenei claimed, on March 4, 2020.

On January 8, 2021, Khamenei imposed a prohibition on the import of globally authorized vaccines, revealing his plans to kill the Iranian people.

“Vaccines from the United States and the United Kingdom are not permitted in the country.” He claimed at the time, “I had told the officials about this before, and now I say it publicly.”

The Iranian opposition (PMOI / MEK Iran) stressed at the time that the regime’s official death toll is fabricated, but it fell on deaf ears. Today, however, even Iran’s state-run publications agree that the numbers are false and demand that the offenders be prosecuted.

Khamenei’s role in the genocide was revealed

If there is justice, all of them must be brought to justice and held accountable for the suffering they have inflicted on the people,” as per an August 15 article published in the state-run Mardomsalari daily.

Khamenei’s role in the genocide was revealed as a result of his orders barring the purchase of approved vaccines, and his officials have undertaken a coordinated campaign to absolve him of any blame or criticism.

Vaccines were barred by Khamenei

“In the meantime, there was a great deal of suspicion that the statements of the Supreme Leader about the prohibition of vaccines made in the United States and Britain were induced as a ban on the import of vaccines in general.

He never opposed the import of vaccines, but from a safe and traceable source,” According to an article published on August 15 by the state-run publication Resalat,

As rage grows within Iran’s already restive society, such statements are empty rhetoric among the Iranian people.