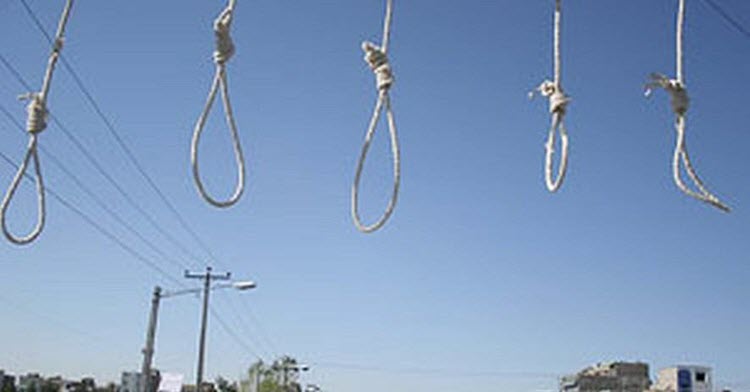 The National Council of Resistance of Iran (NCRI) reports that nine prisoners have been collectively hanged in Gohardasht Prison in Karaj on 28th September.

Informed sources say that this criminal act took place behind the prison wards.

On 27th September the NCRI condemned the mass execution of the same day in a statement. They pointed out that there are another 400 prisoners in Vakilabad prison in Mashhad on death row. They also stated that from 13th to 24th September, 19 prisoners in Shiraz, Gorgan, Tabas, Tabriz, Bandar Abbas, Rasht, Taybad, Orumiyeh and Neyriz prisons were hanged. Thirteen prisoners are in solitary confinement in in Karaj’s Gohardasht and Varamin’s Khorin prisons. Seven more prisoners aged between 25 and 30 are on death row in Minab central prison. Across the country thousands more prisoners are on death row, in particular Ghezel Hessar prison.

“These executions, simultaneous with so-called “moderate” Rouhani participation in the United Nations General Assembly, demonstrates how hollow and deceitful the claim of moderation in the clerical regime of Velayat-e-Faqih is. Various internal factions of religious tyranny ruling Iran don’t have any dispute with each other as far as the suppression of the Iranian people is concerned.”

The NCRI pointed out that the clerical regime is intensifying repression as it is unable to cope with crises at home and abroad, in particular the disclosure of new evidence regarding the massacre of 30,000 political prisoners in 1988 which has only added to the people’s anger.

“Iranian Resistance calls on the Iranian people, especially the courageous youth to protest against the repressive measures of the regime and calls for solidarity with the families of those executed. It also asks the UN Security Council, the Human Rights Council, the UN High Commissioner for Human Rights and all human rights organizations to take immediate actions to confront the growing trend of executions in Iran. The regime of Velayat-e-Faqih is a disgrace to contemporary humanity, must be rejected from the global community, its leaders must be brought in front of international tribunals for crimes against humanity and any relations with it must be conditional upon a halt to executions.”