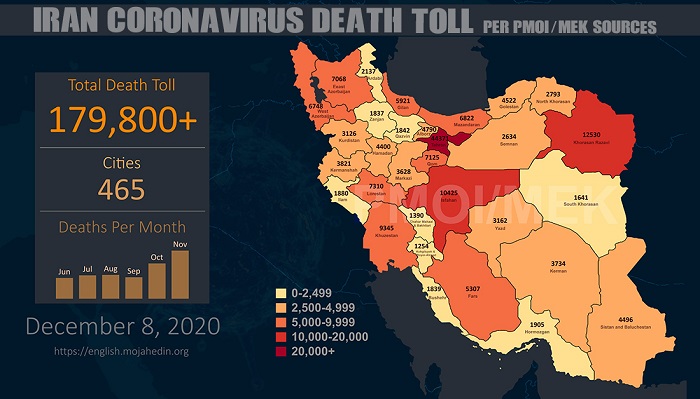 Countries around the world are still battling with the Coronavirus outbreak that has claimed lives the whole way across the world. The situation in Iran is especially worrying, not least because of the lack of transparency on the part of the government, but also because it seems like the situation is getting worse. The People’s Mojahedin Organization of Iran (PMOI / MEK Iran) has been monitoring the situation in Iran since the very beginning of the outbreak. Its latest figures indicate that more than 179,800 people have died after contracting the virus. The regime, however, is reporting that the country’s death toll stands at just 50,917.

According to the (PMOI / MEK Iran), more than 44,371 people have died in Tehran alone, with some provinces being more affected than others.

The regime’s Health Minister Saeed Namaki has said that the winter season is going to be much worse than the fall season. He also said that the virus is “complicated” and “dangerous” and that some provinces, in particular the Tehran province, present much cause for concern.

Interior Minister Abdolreza Rahmani Fazli spoke on Sunday about the latest developments with regards to the health crisis. He said that there are much higher levels of public dissent because of the decision to fine people and issue punishments. He quite rightly pointed out that the “people have enough problems already from this dilemma”, emphasizing that the National Coronavirus Task Force paid careful attention to ensuring that the measures imposed would not increase public anger.

The pressure on the across the country is immense. Many medical workers are risking their lives on a daily basis to help the sick. The deputy of nursing affairs in the regime’s Ministry of Health, Maryam Hazrati, said yesterday that there are around 40,000 nurses in Iran that have contracted the virus and are having to quarantine. She emphasized that this has placed even more pressure on the remaining colleagues.

The dean of Jondi Shapour Medical Sciences University in the province of Khuzestan has expressed major concern about the winter season and the challenges that this will bring. The dean said that in the city of Ahvaz, more than half of the total number of intensive care unit (ICU) beds are occupied. The dean said: “We are concerned about the coming winter season. We hope the virus’ chain reaction is broken so we do not witness a new peak in the winter.”

As our countrymen face the #Coronavirus catastrophe and flash floods, the ruling mullahs have made natural disasters 100 times more damaging with their inhuman policies. They have wasted the country’s assets on nuclear &missile projects &on export of terrorism & warmongering.

Meanwhile, Hamid Souri, a member of the National Coronavirus Task Force said on Sunday: “We have not even been able to control the epidemic let alone break the chain reaction of its expansion.”

Mrs. Maryam Rajavi the President-elect of the National Council of Resistance of Iran (NCRI): As our countrymen face the Coronavirus catastrophe and flash floods, the ruling mullahs have made natural disasters 100 times more damaging with their inhuman policies. They have wasted the country’s assets on nuclear and missile projects and export of terrorism and warmongering.