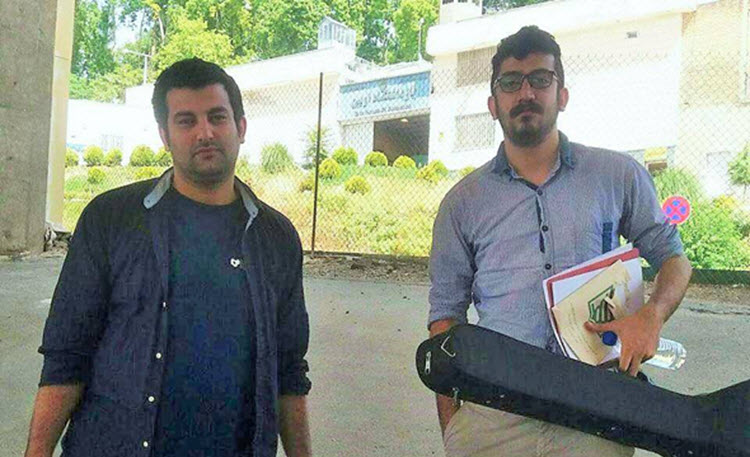 Musician Mehdi Rajabian, 27, and his filmmaker brother Hossein, 31, have been jailed in Iran since June. They each received a three-year prison sentence for “spreading propaganda against the system” and “insulting the sacred”. For the past month, the brothers have been on hunger strike in protest against the treatment they are receiving in prison.

Mehdi’s condition has got very bad, so much so that he was released on furlough. He was hospitalized in Mazandaran where he is from. Authorities have nevertheless ordered for him to return to Evin Prison on Sunday. While in hospital, Mehdi was in contact with WorldViews and was able to explain the torture that he has endured over the past few months.

Rajabian has lost around 33 pounds and his vision has seriously deteriorated. The brothers are refusing all food but will drink water. Mehdi has said that his brother has a kidney infection.

He said: “They did not provide us with medical care. We first protested, but because of our protest, they separated me from my brother and they put me in a section with Tanzanian drug-dealers and Somali pirates as a punishment. They banned us from seeing our family or our lawyers.”

Ishaan Tharoor, for the Washington Times, said that this is not unusual in Iran. The International Campaign for Human Rights in Iran said last month that at least eight Iranian prisoners are on hunger strike in the country.

Tharoor said: “The Rajabian brothers would probably not think of themselves as “political” prisoners. The two were big players in Iran’s underground music scene and managing partners of Barg Music, a popular online music distribution service now blocked by the government. Iranians must pass official censors and obtain government licenses to make music — leaving the duo vulnerable to arrest.”

The trial for the brothers lasted a few minutes and they were not listened to in court and were not allowed to be represented by a lawyer.

Philip Luther of Amnesty International said: “Expressing yourself through art is not a crime and it is outrageous that the Iranian authorities have resorted to locking up artists and musicians simply for their artistic work. Mehdi and Hossein Rajabian are prisoners of conscience who shouldn’t be forced to spend a single minute behind bars. The Iranian authorities must order their immediate and unconditional release.”

The imprisonment of the Rajabian brothers is seen as another step in the crackdown by the Iranian regime on the Iranian people. Last week, a gallery manger and his wife were held in Evin Prison.

Mehdi said that he would like to see artists from all over the world protest these unjust sentences. He said: “The biggest pain of an artist in prison is to be forgotten.”