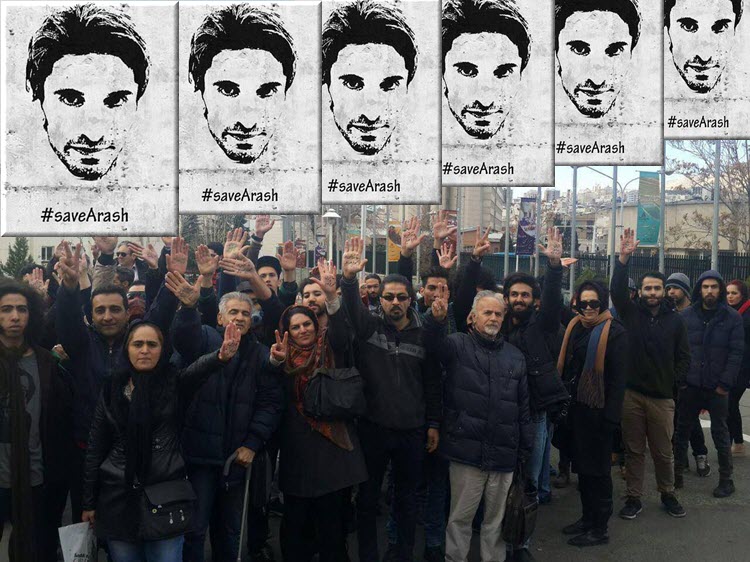 Political prisoner Arash Sadeghi has been on hunger strike for over 70 days and is now in a critical condition. Mr Sadeghi started his hunger strike on 24th November in protest against the unjust arrest of his wife, Golrokh Ebrahimi Iraee, and the unlawful process they experienced during their arrest and trial.

Sadeghi was doing a masters degree in philosophy at the University of Allameh when he was denied access to education because of his student activities. He was arrested on numerous occasions between 2009 and 2014 and was finally sentenced to 19 years in prison for “propaganda against the regime” and “assembly and collusion against national security”.

His wife was accused of insulting the “leadership system” and was sentenced to six years in prison. The sentence also took into account an unpublished article she wrote in which she declared herself to be against the inhumane punishment of death by stoning.

Sadeghi said that he would continue with the hunger strike indefinitely until his demands are met and his rights are respected.

On 1st January he suffered serious seizures and had lost unconsciousness. His father was allowed to meet with him and during this time Sadeghi lost consciousness again and vomited blood.

On the morning of 2nd January, hundreds of Iranians protested outside Evin prison. They called for the release of the husband and wife. Numerous mothers of political prisoners were in attendance, as were many human rights defenders.

The protesters held photos of the couple and called for their release as well as that of other political prisoners.

Security forces attempted to disperse the crowd but were unsuccessful due to increasing numbers of protesters.

Back in December Sadeghi’s father, Hossein Sadeghi, undertook a hunger strike in support of his son. He said: “My son Arash in his 67th day of hunger strike is experiencing moment to moment struggle with death. On Monday, December 26, Arash was urgently transferred to Taleghani hospital in Tehran due to his deteriorating health condition and underwent medical examination. The hospital’s doctors said my son was in extremely dire health condition and in a written report warned about my son’s ‘dangerous heart condition and risk of cardiac arrest, and danger of coma and even death’.”

He said that his hunger strike, starting on 23rd December, is to “protest the authorities lack of attention to address the demands of my child, and to protest keeping him incommunicado and denying him visit with his wife, and also to support his hunger strike and legitimate demands.”

He added: “I demand his dire condition be addressed and his demands be met. I call on all to be the voice of my son, his wife and other imprisoned loved ones (political prisoners).”

Iran: At Least 30 Executions in the Past Month