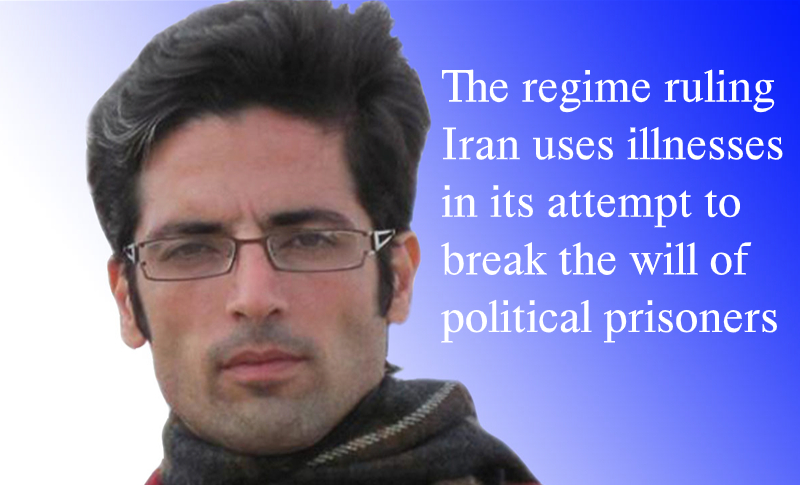 Reports from Iran are saying that political prisoner Majid Assadi is not receiving the urgent and essential medical care that he requires.

Assadi, a graduate of Alameh Tabatabaei University, was arrested at home back in 2017. He was sentenced to six years imprisonment and two years in exile on the charges of “propaganda and conspiracy against the establishment” and “threatening national security through assembly and collusion”.

His current stint in prison is not his first. He was imprisoned from 2011 for four years.

In 2012, Assadi spent a week on hunger strike in protest against the regime’s horrid treatment of political prisoners Ali Moezi and Vahid Asghari who were put into solitary confinement and deprived of visits.

Assadi suffers from a number of health conditions including a rheumatism disease called Ankylosing spondylitis (AS) that has a serious impact on his spine. This dangerous condition should be carefully monitored frequently, at least every three months in a hospital, but prison authorities at Gohardasht Prison in Karaj have not allowed him to attend outside appointments.

On top of this, Assadi has several other health concerns, such as ophthalmological ulcers and inflammation. As a consequence of being denied medical care, he has also seen his digestive problems worsen during his time in prison.

Another political prisoner that has been denied essential medical care is Arash Sadeghi. He has cancer and was operated on in September last year. After the gruelling medical procedure, the notorious Islamic Revolutionary Guard Corps (IRGC) ordered that he was immediately sent back to prison.

He was given no time to recover from the invasive surgery and was not allowed to proceed with the several rounds of chemotherapy that he needs. His health situation then deteriorated but he was denied follow-up care.

Sadeghi, a human rights activist, was charged with “propaganda and conspiracy against the establishment” and insulting the leaders of the regime. He is currently serving a 15 year sentence.

The regime ruling #Iran uses illnesses in its attempt to break the will of political prisoners.#HumanRightshttps://t.co/ZgWPu9KwRx

A few months ago, Amnesty International expressed its alarm about the situation of political prisoners, in particular those that are being denied access to health care. It highlighted that the lack of post-operative care has resulted in Sadeghi getting an infection on the arm that was operated upon and that he has lost all sensation in his limb. The organisation expressed its concern that instead of treating this issue, prison authorities have told Sadeghi’s family to get him stronger painkillers.

Critically- ill human rights defender and cancer patient #ArashSadeghi should never have been jailed in the first place and now Iran’s authorities are violating his right to life by denying him life-saving medical care. @khamenei_ir Release Arash NOW!https://t.co/p7dDL2ummV pic.twitter.com/EIhLiHO8Kp

The Iranian regime’s blatant disregard of human rights is something that activists around the world are drawing attention to. However, foreign governments have not been very forthcoming in their criticism of the regime’s actions.