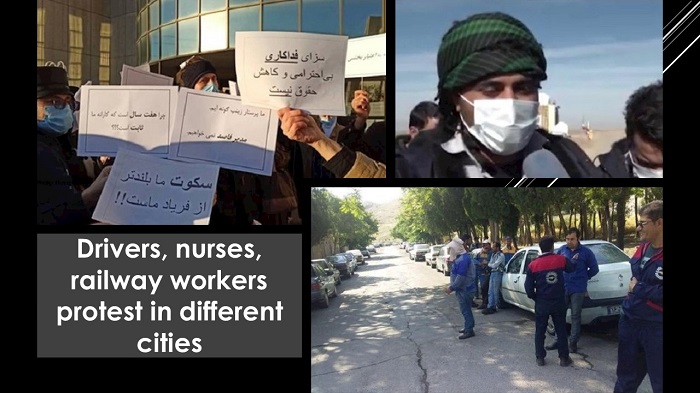 The  People’s Mojahedin Organization of Iran (PMOI / MEK Iran), and the National Council of Resistance of Iran (NCRI) reported that there has been a significant amount of protest activity taking place across Iran over the past few days as concerns about another major uprising mount.

Strike by drivers in Kerman

(PMOI / MEK Iran) supporters from the city of Kerman reported that for several days, drivers from the Shahdab Company in the province of Kerman have been holding a strike. They were prevented from entering the mine on Saturday 23rd January so they proceeded to hold a rally in front of the country governor’s office in Bafgh.

#IranProtests
3,500 workers in #Kerman Coal Company went on strike May 4 to protest their managers' decision in transferring shares to private sector. They marched outside the Friday prayers offices.#Rouhani has left them vulnerable to #Covid_19 pic.twitter.com/d4w1wwlfhJ

One of the drivers at the mine emphasized the poor salary conditions that the workers have to put up with. They said that a heavy truck driver has a base salary of around $82 (19 million rials). Their income is between 35 and 50 million rials (between $152 and $217) per month and their work is carried out in tough conditions. For example, they said that the drivers deal with heavy machinery and are given insufficient breaks and their access to bonuses is minimal.

The workers also highlighted that “educational” is mentioned in their contracts – no doubt an excuse for such low pay, despite the many years of experience these drivers have and the 15 days of unpaid training they have already carried out.

Nurses have also been protesting, with their concerns being amplified by the Coronavirus health crisis that they are right in the middle of. On Sunday 24th January, nurses at the Milad Hospital in the country’s capital protested because of the empty promises that have been made, namely the Coronavirus response bonus that has not been paid to them. They called for nursing laws to be implemented and for salaries to be increased.

Nurses from the same hospital protested back in December. They were told by bosses that the hospital because it is a private one, could not afford to pay them their bonuses.

#Iran regime continue to squander the country's resources on incitement to war, terrorism, as well as missile and nuclear projects, while salaries of healthcare workers fighting COVID19 r not being paid. https://t.co/CbfvtQgF7F pic.twitter.com/FLVpPDOGYR

Strike by contract workers in Arak

(PMOI / MEK Iran) supporters from the city of Arak reported that contract workers at Josh Gostar company striking at the weekend. The contract workers are posted to the railway company in Arak city in the province of Markazi in the central part of the country. Their main grievance was that they have still not been paid overdue wages.

They gathered in front of the main office of the Arak Railway Administration, calling for their wages that have not been paid for two months to be sorted immediately. They took the occasion to call on the private shareholders and owners of the company to be fired.

The  People’s Mojahedin Organization of Iran (PMOI / MEK Iran), and the National Council of Resistance of Iran (NCRI) reported that the people of Iran are fed up and they want some of the pressure they are being put under to be relieved. The Coronavirus health crisis has exacerbated many of the problems in society and they are desperate to see the regime collapse to give way to a democratic leadership that will put the people first and reverses the damage that the regime has done over the past four decades.

State media outlets have been warning the regime that uprisings have been sparked by less anger and that it is impossible to know what is going to happen if the people’s anger is left to simmer.

More than 206,800 people have died of the novel #coronavirus in 478 cities checkered across all of #Iran's 31 provinces, according to the Iranian opposition PMOI/MEK. pic.twitter.com/rlWQyizLS8