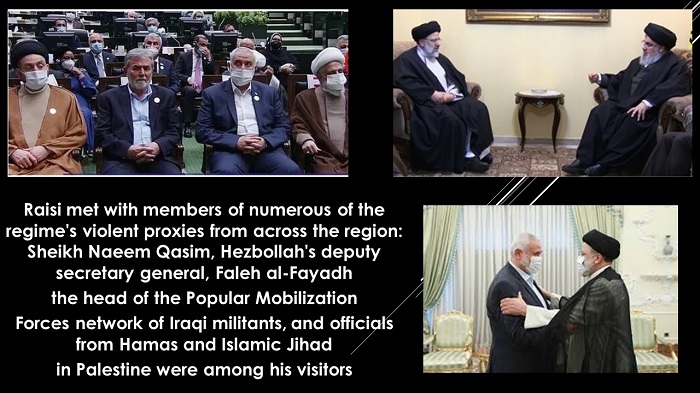 The current Iranian president’s term, which began on August 3rd, is seen by political prisoners in Iran and the Iranian exiled community as a validation ceremony for his tyrannical efforts on behalf of the regime.

Raisi was a prominent member of the Gohardasht Prison Death Commission and a deputy prosecutor in Tehran in 1988. He oversaw the death of thousands of political detainees on that commission, particularly those belonging to the People’s Mujahedin of Iran (PMOI / MEK Iran).

According to a first-hand report from a political prisoner who met him in 1988, his expertise was his unwavering commitment to protecting the Supreme Leader and his corrupt regime at all costs.

“I was struck by his youth almost as much as I was struck by his arrogance, intolerance, and thuggish attitude. The effects of this lack of formal education were immediately apparent to me. Raisi clearly reveled in having power over life and death, and he wielded it freely in thousands of cases during that summer’s massacre of political prisoners,” says Mahmoud Royaie.

When confronted about his involvement in the 1988 executions, Raisi ironically claimed that he had spent his entire career defending human rights. Raisi was not defending human rights for Royaei, who was serving a 10-year term before being called before the execution commission. Instead, he was making life-or-death decisions in seconds, with execution being the most common option.

Women are half the value of men

“The basis of my 10-year sentence was nothing more than a refusal to submit to the Islamic theocracy or disavow affiliation with the organization.

That affiliation meant the explicit denial of many of the regime’s closely held, backward religious beliefs, such as the notion that Islam requires the forced veiling of women, that women are half the value of men, and that adherents of other religions are ‘infidels’ whose voices must be excluded from Iranian society,” Royaei added.

Testimony is not a once-in-a-lifetime experience

This testimony is not a once-in-a-lifetime experience, as the government has demonstrated throughout its history. Dungeons, interrogation rooms, and isolation chambers awaited those who disagreed with the regime. Torture is still a frequent practice.

People are tortured and raped frequently in the hopes that you will disown any organization that opposes the regime.

Those who escaped execution in 1988 typically did so because they did not appear to be significant supporters of the MEK or other opposition groups.

Raisi’s election is seen as the end of hope

In Iran, Raisi’s election is seen as the end of hope. While Khamenei’s supporters refer to him as the leader of an Islamic Revolution, the truth is that he is the leader of a group of radicals who will go to any extreme to keep their power and control over the Iranian people’s wealth.

This election was designed to install in power a leader without conscience who would back Khamenei regardless of his repressive policies. This will not be tolerated indefinitely by the Iranian people. Instead, a day will come when this regime’s injustices will be exposed. The Iranian people, who want something better for their society, haven’t yet lost hope.