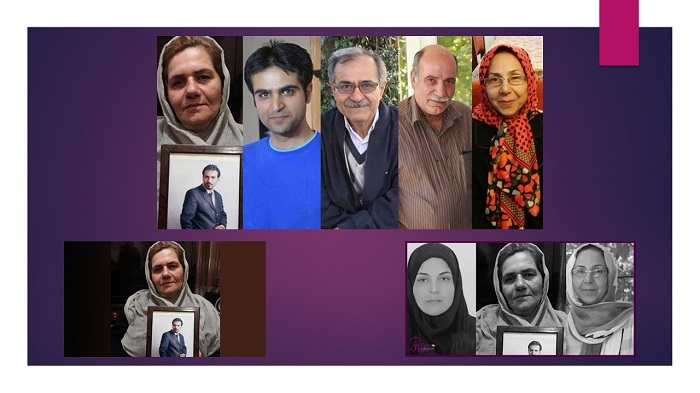 On the eve of the one-year anniversary of the November 2019 Iranian uprising, which saw nationwide anti-regime protests, the mullahs’ suppressive forces arrested a large number of political prisoners who were previously released and the families of people associated with the People’s Mojahedin Organization of Iran (PMOI / MEK Iran), an opposition group.

Let’s look now at those who have been named by the National Council of Resistance of Iran (NCRI).

On Saturday, Sina Zahiri was arrested in Tehran and taken to Evin Prison. He had previously been sentenced to five years imprisonment for sympathizing with the (PMOI / MEK Iran) and is serving a two-year term.

Simultaneous with anniversary of November 2019 uprising and fearful of eruption of popular protests, regime’s suppressive forces arrested a large number of former political prisoners and families of members of PMOI/MEK.

They were previously arrested in March 2018 and interrogated on Evin’s Ward 209 for two months before they posted bail.

Of particular concern is Bani-Ameriyan, who was undergoing chemotherapy treatment for his leukemia when he was rearrested. The regime’s systematic denial of medical treatment as a form of torture for political prisoners, especially given the coronavirus pandemic that is raging unabated in the prisons, means that his life is at risk. Over 160,200 people have died of the coronavirus in Iran, according to reports by the National Council of Resistance of Iran (NCRI), and the People’s Mojahedin Organization of Iran (PMOI / MEK Iran).

On an unspecified date in November, former political prisoner Hamid Sharif was arrested and taken to Evin Prison.

They’ve also summoned many others and issued warnings against conducting any activities on the anniversary, which could range from nationwide protests to memorials for the martyrs.

On a related note, political prisoner Fatemeh Mothana, who has been behind bars for six years, has been diagnosed with Typhus fever in Evin Prison, but authorities refuse to admit her to the hospital. Her life is in danger, especially because she also has liver problems and severe Colitis.

The NCRI urged the United Nations Secretary-General, Human Rights Council, High Commissioner for Human Rights, Special Rapporteurs, and all human rights organizations to take “urgent action” to ensure the release of political prisoners at least until the coronavirus pandemic is over to avoid “a humanitarian catastrophe”. They further called for an international fact-finding mission to visit Iran’s prisons and meet with inmates, especially political prisoners.

Mrs. Maryam Rajavi the President-elect of the National Council of Resistance of Iran’s (NCRI): The horrific slaughter of protesters in November 2019 and the #1988Massacre of 30,000 defenseless political prisoners, which the regime’s current leaders were involved in and continue to brazenly defend, are the most manifest cases of crime against humanity.