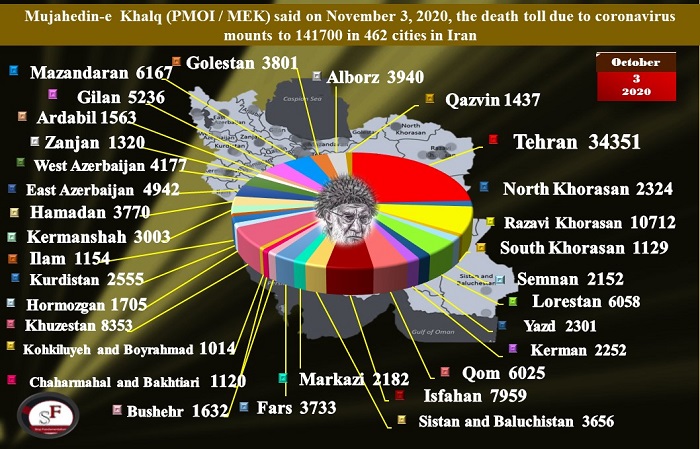 More than 141,700 people have died after contracting COVID-19 in Iran. The virus has spread to 462 cities in the country, affecting every single province.

The regime’s official death toll however stands at just 36,160. This is around a quarter of that reported by the National Council of Resistance of Iran (NCRI) the People’s Mojahedin Organization of Iran (PMOI / MEK Iran) – the regime’s main opposition that has been observing the situation and compiling statistics since the beginning of the outbreak.

The People’s Mojahedin Organization of Iran (PMOI / #MEK) announced this afternoon, November 3, 2020, that #Coronavirus has taken the lives of more than 141,700 in 462 cities across #Iran. #Covid_19 https://t.co/3hVuDaNAGB pic.twitter.com/rl3N2cBmKb

The death toll in Tehran alone stands at 34,351, showing that the regime’s official statistics cannot be trusted.

Despite providing false statistics and underemphasizing the gravity of the situation, a spokesperson for the Ministry of Health said on Monday that there had been an unprecedented number of deaths in the previous 24 hours (allegedly 440) and more than 5,300 people in intensive care.

There have been a number of measures put in place to stop the spread of the virus, such as the ban on private vehicles from entering certain provincial capitals. However, not enough measures have been taken and the virus is still spreading at an alarming rate.

A member of the National Coronavirus Task Force has advised on a number of occasions that a national lockdown is implemented. Minoo Mohraz said that the circumstances in the country are “atrocious” and that if stronger restrictions had been implemented before, especially in Tehran, the spread of the virus would have slowed down.

More than 141,700 people have died of the novel #coronavirus in 462 cities checkered across all of Iran's 31 provinces, according to the Iranian opposition PMOI/MEK.

She said that the lack of firm action has many consequences, including the high number of people having to be hospitalized and the impact on the exhausted medical workers. She said that the government’s reasoning behind not locking down Tehran is unclear but that it is nevertheless essential and urgent.

Another member of the National Coronavirus Task Force pointed out that Iran has one of the worst death tolls in the world per million people and said that further to imposing lockdown measures, martial law may need to be implemented.

The deputy governor of Qazvin province said a few days ago that if the trend continues the same way the province is going to lose complete control of the situation.

Over 141,700 people have died of the novel #coronavirus in 462 cities checkered across all of #Iran’s 31 provinces, according to reports tallied by the Iranian opposition PMOI/MEK as of Tuesday afternoon local time, November 3.https://t.co/OkdpvPbXA2

The Iranian regime’s handling of the health crisis has been shameful. It has shown that its priorities do not lay with the people, including the many medical workers that are putting everything on the line to help the country through this catastrophe.

The regime refuses to listen to the experts that have advised on scientific and medical matters, preferring instead to turn a blind eye to the reality of the situation. Medical workers are already exhausted and deserve support from the country’s leadership. Instead, they are being shamefully neglected and abandoned – just like they were at the beginning of the outbreak.