Stop Fundamentalism, 17 August – A representative of Ali Khamanie, the so called supreame leader of the Islamic Republic, in Revolutionary Guards Forces in Ghazvin, called for the arrest and punishment of Mehdi Karubi, former presidential candidate in the recent Iranian election. 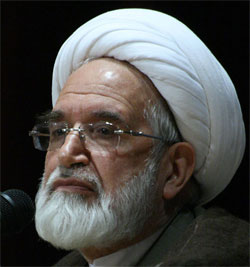 Morteza Hoseini told Sahar news Monday that Karubi should be heavily punished for the letter he wrote to Rafsanjani, the head of Iranian expediency council.

Karubi, in an open letter sent to Rafsanjani, unearthed horrifying news of torture, rape and killings of young women and men in Iranian prisons.

Many Iranians especially young people have been arrested duing the past two months of uprising against the results of the presidential elections in Iran.  There are repeated news of torture, rape and killing of these prisoners coming out of Iran.  Many International organizations, including Amensty Internation have condemnd extreme violations of human rights in Iranian prisons.

The unearthed truth about treatment of prisoners in Iran has created huge shockwaves among the ranks of the Iranian regime as some of the arrestees have turned out to be the suns and daughters of high level officials of the Islamic Republic.