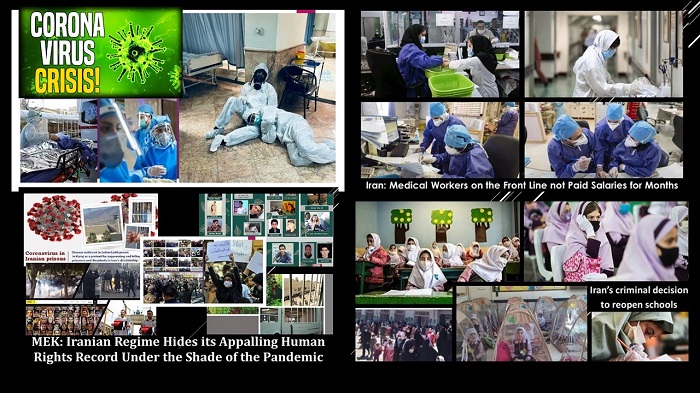 It used to be a practice in parts of the Old World for bells to be tolled in a municipality when there was a danger of a fatal disease spreading. In many small, more traditional villages the same thing still happens, unfortunately with depressing regularity this year.

In Iran, when the pandemic first reared its ugly head, the country’s health ministry and associated Covid-19 Task Force used a color-coding system to designate the relative danger of contracting the virus in each town, city, or province in Iran. Red was the worst color.

Now, it seems, the regime has all but given up on suppressing the disease, making almost the whole country at code red, if not beyond red. More than 120,000 Iranians have died from Covid-19 according to reports by the People’s Mojahedin Organization of Iran (PMOI / MEK Iran) already and many cities are bracing for the third wave with no end in sight.

Over 120,100 people have died of the novel #coronavirus in 458 cities checkered across all of #Iran’s 31 provinces, according to reports tallied by the Iranian opposition PMOI/MEK as of Saturday afternoon local time, October 10.https://t.co/1pdq3mnlX1

Several medical professionals and officials have commented on the gravity of the situation in Iran. “We are in the middle of the storm and it no longer makes sense to speak of different colors to refer to the situation of each city or province because the whole country is in red,” said the Deputy Minister of Health, Iraj Harichi, according to the Shafaghna news site.

speaking in a talk show, the deputy minister of Health Iraj Harirchi said “No yellow or orange zone in Iran at all, and he emphasized the whole country is in a ‘red zone’ for #COVID19. “The death toll would rise,” added the official. pic.twitter.com/zEeFBIwlVa

Isfahan is in a “critical situation,” according to a spokesman for Isfahan University of Medical Sciences, Arash Najmi.

Medical experts have complained that too many people are not respecting basic health requests like social distancing and the regime has even deployed patrols in Isfahan supposedly to make sure people in the street are complying. At the same time, they are saying nothing about the probable cause of the third wave, which was the Muharram religious celebration. The regime insisted on the occasion being attended by as many Iranians as possible, ignoring the health consequences.

#MEK has been monitoring the situation since the beginning of the outbreak because the mullahs’ regime cannot be trusted to be honest in such situations. The regime claims that the numbers of people have died – just a sixth of the figure stated by the MEK. https://t.co/NHJhZt1z3c

The other worry for epidemiologists like Masoud Younesian, of the Epidemiology Committee of Kovid-19, is that the regime insisted on students and educators returning to school. About 15 million have done so. Although the effects of the virus are generally regarded as less severe in young people, this doesn’t mean they are immune. Because of the close quarters while at school, there is a much higher risk of students transmitting the virus to their families, especially older people. The statistics obtained by the Mojahedin-e Khalk or MEK bear out the conclusion that “the new wave of infections” is a reality.

Supreme Leader, Ali Khamenei, commented very early on in the pandemic that the disease was not serious: “the Covid-19 is a temporary issue, it is not something extraordinary. Let’s not make a big deal,” he said. That was back in March, but it doesn’t seem from the regime’s lackluster response that he has changed his mind. Regime president, Hassan Rouhani, has said more or less the same thing, likening the disease to a cold despite all medical evidence to the contrary.

As Khamenei called the #COVID__19 a "blessing", the mullahs' regime is sending all Students to the "corona minefield" instead of sending them to the universities, in holding the "Entrance Examination of the University"#Iran #FreeIran2020#IranianStudentsGenocide pic.twitter.com/ajSEeVjj8U

Khamenei and his herd of mullahs appear to have adopted the strategy of “herd immunity.” This has been decried as cruel and inhumane elsewhere in the world, even in wealthy countries like Sweden where the government has been committed to supporting the health service. It is probable that the Iranian regime has opted for herd immunity to suppress the vitality of the population and their desire for regime change. Death and destruction may be a “blessing” for Khamenei, but a short-lived one, as the Iranian people are learning that the only way they can get a responsible government is to get rid of the one that has ruled Iran since the 1979 Revolution.

An uprising is imminent

The Iranian opposition, the National Council of Resistance of Iran (NCRI) and (PMOI / MEK Iran), believes that the regime is using a callous response to the pandemic in Iran as part of its arsenal against any protests and suggestions of an uprising. However, the regime is living on borrowed time, and it is hard to imagine that it can resist the tidal wave of discontent about to engulf it.

The rapid rise in the number of #Coronavirus victims in #Iran is part of the mullahs' strategy of creating mass casualties to forestall the danger of an uprising and their overthrow. #COVID19 pic.twitter.com/Ao8Zh9dYL3

While the regime officials report overcrowded hospitals and a large number of helpless patients waiting in queue to be admitted, especially in Tehran, Khamenei is not giving any money to combat the Coronavirus.

Hail to the doctors and nurses who are saving lives by taking the highest risks. As the number of casualties is exceding 120,000, the IRGC must be disbanded, and its budget and facilities allocated to the healthcare system to help combat Coronavirus.