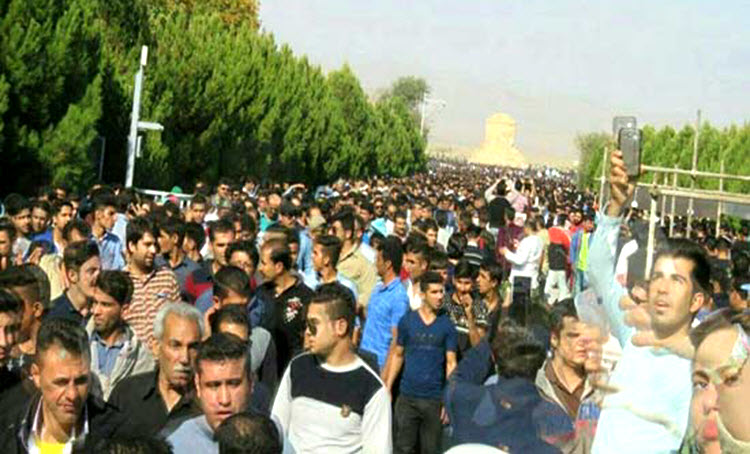 Thousands of people from various locations gathered at Pasargadae, by the tomb of Cyrus the Great last Friday, in an attempt to protest against the current regime in Iran and its policies, which often turn against their own people. Unofficially, October 29 has become the unofficial ‘international Cyrus Day’.

Despite the threat of arrest and other consequences, the protesters bravely chanted slogans such as:  “Death to the dictator” , “Let go Syria, think (take care) of us”, “No to Gaza, No to Lebanon, My life only for Iran”, “Merciless commander (General) has plundered Iran”, “freedom of thought, impossible with the mullahs” and “The clerical regime, only oppression, only war”.

Naturally, the protests have resulted in a strong negative reaction from the mullahs’ regime in Iran, who see this as a political threat to their rule. The response has echoed from the political leaders to the clerics of the country, and across the state media.

One of the clerics of the Iranian regime, Mullah Noori Hamedani, raised various complaints about the event, taking the side of the Iranian regime. He voiced his concerns during a meeting with staff from the Armed Forces Logistics and the Ministry of Defense: “In the past few days, a group of people gathered around the tomb of Cyrus in Shiraz and chanted slogans.” He urged that these acts are ‘counter-revolutionary’ and that the regime should do something about it immediately. Referring to those who had gathered at Pasargadae, he said: “I wonder how they are allowed to gather in the tomb of Cyrus and chant the same slogans for Cyrus as we do for our Supreme Leader.” He added in a threatening tone: “Despite being alive, we are only sitting and watching. Which authority has failed to fulfill its obligations so that these people could gather like this?”

The state-run media have also declared the gathering at Pasargadae as a direct political opposition move, threatening and confronting the leading mullahs’ regime in Iran, calling for these kinds of gatherings to be stopped.

Since the gathering, the authorities have arrested the organisers of the event. Just a couple of days ago, on October 31, the prosecutor of the Iranian regime in Shiraz, Ali Salehi said on the state-run news channel Mehr news: “The actions of these individuals had been monitored by security, intelligence and police…Leaders and main ringleaders of the rally that chanted disturbing and anti-values slogans were arrested… judicial files have been formed for these individuals…and they will be dealt with the necessary judicial procedure.” Their names have not been released.

The National Council of Resistance of Iran (NCRI) calls for Iranians to take a stand and protest against these unlawful arrests, as an act of solidarity with the families of those arrested, especially in the face of the unfair judicial system in Iran where people can be punished or even executed without a fair trial or access to a lawyer. That’s why the NCRI also call on the international community to immediately take a firm stand to demand that the detainees be released.