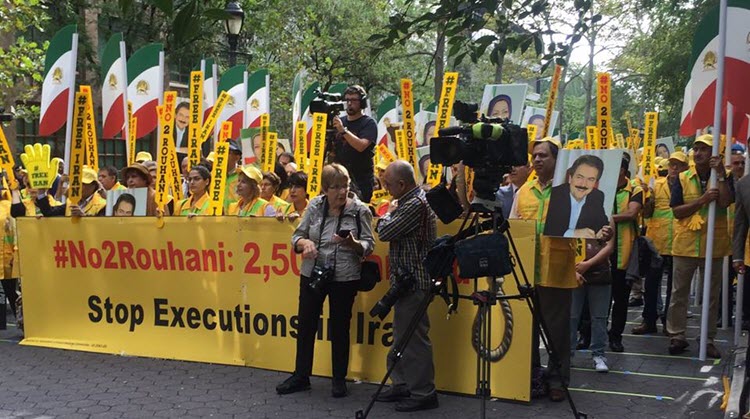 Brian Brinker wrote an article about the protests being carried out against the Iranian president’s visit to the United Nations. Protests are being carried out in New York City where Hassan Rouhani is due to meet other world leaders at the UN Headquarters.

This summit will be one of the biggest meetings of world leaders since the Iranian deal was signed last year. Since the deal, sanctions against Iran have been rolled back, but tension is still high. Iran has been backing the Assad regime in Syria and has been fuelling the civil war in Yemen.

The protesters in New York denounced Rouhani and his human rights abuses. Tensions remain high with foreign governments including the United States, United Kingdom and Germany who has accused Iran of violating the treaty.

“Rouhani swept into power as a supposed moderate, promising gradual reform, economic growth, and a lighter hand than the previous regime. However, his track record while in office is questionable, with executions seeming to accelerate under Rouhani’s leadership, and oppression remaining wide spread,” said Brinker.

The National Council of Resistance of Iran (NCRI) reports that over 2,000 Iranians, many of whom are juveniles, have been executed by the regime since Rouhani came into office. Amnesty International backs these reports, and add that almost 700 people were executed during a 6 month period.

The protestors also brought up the issue of the 1988 massacre where around 30,000 people were executed. Many of those who lost their life were members of dissident group Mojahedin-e-Khalq.

At the UN, British Prime Minister Theresa May spoke with Rouhani. A lot of the conversation revolved around the subject of Nazanin Zaghari-Ratcliffe, a British citizen currently jailed in Iran. The Iranian government say she was spying on Iran.

Ms. Zaghari-Ratcliffe is a 37 year old British woman who worked from the charitable arm of Thomson-Reuters in Iran. She was separated from her young daughter, arrested, charged and found guilty – but of what, we are unsure. She has been sent to jail for five years. Spying is likely to be one of the charges against her.

Last year the British government, for the first time since the embassy siege, re-established official diplomatic relations with Iran. Despite this, the regime continues to persecute British (and other) citizens, “often on questionable charges with little to no evidence of wrong doing”.