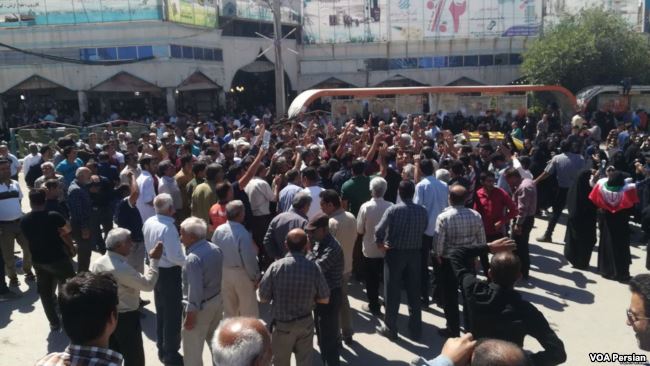 Since the turn of the year uprising during December and January, when thousands of Iranians marched in more than 140 cities and towns across the Islamic republic, antigovernment demonstrations have rocked Iran. The clerical establishment that forbids public dissent, and has a history of harsh crack-downs on unauthorized protests, is being challenged by its people.

Even after some 25 Iranian citizens were killed during the uprising, the people are still demanding their constitutional right to hold peaceful demonstrations.

On June 11th, the government approved a proposal by the Tehran City Council to designate 12 specific locations where authorized protests can be held in the capital — a move intended to placate protesters that is viewed by the Iranian people as an attempt by the government to control protests.

According to Iran’s semiofficial ISNA news agency, the protest zones in Tehran include the Shiroudi, Dastjerdi, Takhti, Motamedi, and Azadi sports stadiums; the Goftegoo, Taleqani, Velayat, Pardisan, Honarmandan, and Shahr public parks; and an area near the parliament building in the capital’s Baharestan neighborhood.

The government said it was working with city councils across Iran to designate other protest zones.

Iran’s constitution stipulates in Article 27 that citizens have the right to hold assemblies, “provided arms are not carried” and that the assemblies “are not detrimental to the fundamental principles of Islam.” But, authorities impose complicated requirements, making it almost impossible to obtain permits for protest gatherings or rallies. Based on the Interior Ministry’s regulations, long before the date of an event, an individual who wants to hold an assembly must present the list of people responsible for its security and disciplinary aspects, as well as the exact time of the gathering.

On June 12th, the reformist daily Etemad published a map of Tehran on its front page that showed the approved protest zones, and claimed that they were necessary to avoid violence and disruption to residents. “The unrest in late January and the widespread popular demands throughout the country during recent months have led to a decision to facilitate the holding of protest gatherings, while emphasizing the recognition of people’s right to protest,” said the Etemad editorial.

Protests about rising unemployment, as well as demands for greater social and political freedoms, and calling for President Hassan Rohani and Supreme Leader Ayatollah Ali Khamenei to step down, are escalating.

In December, Rouhani said, “people are absolutely free to criticize the government and protest, but their protests should be in such a way as to improve the situation in the country and their life,” adding that “criticism is different from violence and damaging public properties.” Despite what Rouhani claimed, authorities continue to crack down on protesters and detain those openly critical of the establishment.

In fact, in the city of Kazeroon last May, several people were killed after residents of protested a local government decision to split the city into two.

Other instances occurred when several women who attempted to stage a protest in Tehran to mark International Women’s Day were detained last March. As well, in February, Iranian security officers arrested dozens of women who protested in Tehran against the compulsory hijab, by removing their head scarves.