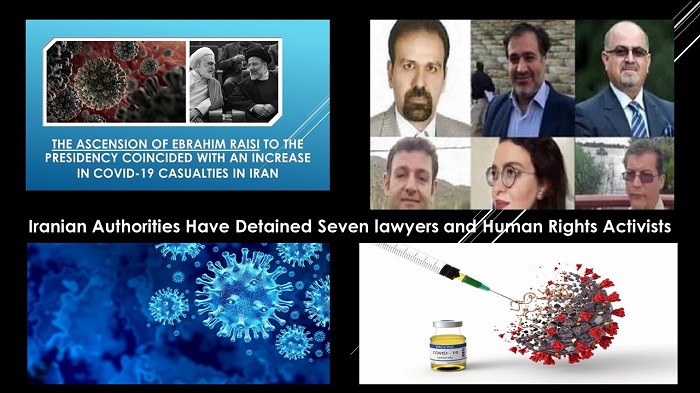 The People’s Mujahedin of Iran (PMOI / MEK Iran), and the National Council of Resistance of Iran (NCRI), reported that on 14 August, seven lawyers and civil activists were arrested in Iran. The group of civil society activists and lawyers was jailed because they planned to sue Supreme Leader Ali Khamenei and members of the National Coronavirus Task Force for failing to do their duties, resulting in the deaths of thousands of Iranians.

The regime’s vast killing of the people

It should be highlighted that, in the aftermath of the regime’s vast killing of the people with the purposefully expanded coronavirus, the public’s fury toward Khamenei has grown. People openly curse and blame Khamenei for the current state of affairs.

The government was blocking vaccine imports

During faction fights, it became evident that the government was blocking vaccine imports on purpose. On the pretense that foreign vaccines are targets of animosity against Iran’s people.

Khamenei has effectively rendered the Iranian people helpless against the coronavirus. Following that, some regime members mocked the initiative, claiming that Western countries may implant microchips and GPS devices with their vaccines in people’s bodies.

Now it’s too late for the country to get these life-saving vaccines. In an article published by the Salam-e-no on August 15, Dr. Seyed Ali Hosseini Esfidvajani, Complex Systems Specialist and Faculty Member of Physics at Beheshti University, said:

“The problem with vaccination is that successful vaccines have been pre-purchased for months and it is unlikely that an effective vaccine will be available quickly in the country,” he added.

“Explain that a comparison of data from the UAE and the United Kingdom shows that the effectiveness of the Sinopharm vaccine maybe only 50%, and if this number is correct, it means that if we vaccinate the whole country with Sinopharm, we will be like a country of 40 million unvaccinated, and the next wave of the coronavirus is on its way, Esfidvajani continued.

The rise in public discontent with Khamenei

And it becomes evident that Khamenei’s true goal was to divert people’s attention away from the coronavirus, fatalities, and economic troubles, even only for a short time.

According to The People’s Mujahedin of Iran (PMOI / MEK Iran), and the National Council of Resistance of Iran (NCRI), this barbaric deed has already killed at least 368,400 individuals. This is a circumstance that should worry Khamenei because, despite the regime’s plans, it will end up becoming a trap.

If the arrests of these seven attorneys and activists are linked to the rise in public discontent with Khamenei, it demonstrates the government’s dread of popular protest.