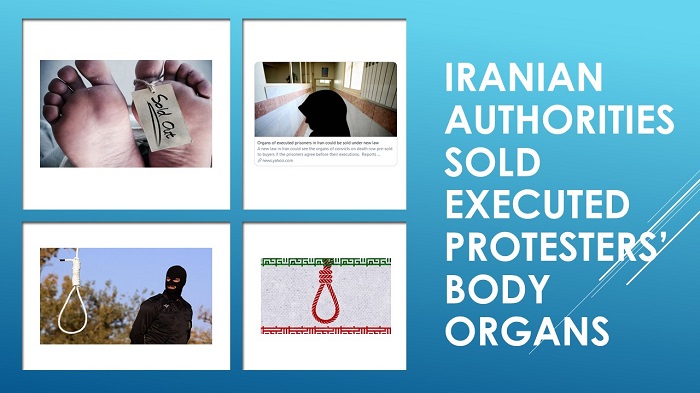 Just over a year ago, Iranians went out on the streets in a mass protest initially sparked by a tripling of fuel prices. The Iranian regime responded by slaughtering 1,500 of the protesters and imprisoned 12,000 more. Reuters confirmed in a special report on December 23, 2019, about the deadly crackdown on November nationwide protests in Iran the death toll of 1500 that was announced by the People’s Mojahedin Organization of Iran (PMOI / MEK Iran) on December 15, 2019.

Families never really knew what happened to their loved ones. When the bodies of some of the executed were eventually returned, their families found that organs were often missing. It seems that the Iranian regime had cut out organs from the deceased and sold them for a profit. This was even after the regime had made families pay to get their relatives’ bodies returned.

The Iran Kargar website reported that “when the parents of 17-year-old worker Mohsen Mohammadpour received the corpse, they saw Mohsen’s body had been autopsied and his organs had been removed. The SSF had killed Mohsen on Hafez Street in Khorramshahr city, Khuzestan provinces. Eyewitnesses supporters of the (PMOI / MEK Iran) said that ‘he was shot in his head and chest four times on November 15. Mohsen was a construction worker, and he was the only breadwinner for his underprivileged family. Meanwhile, MOIS agents took 380 million rials [$3,300].”

#IranProtests
In the #BloodyNovember of 2019, Iranian authorities killed over 1,500 protesters, including minors and women. However, they did not show mercy to victims' lifeless bodies and removed their body organs and sold them.https://t.co/JyRfrwNoYF

On September 19th, 2019, even before the mass protests and killings by state security forces, the National Council of Resistance of Iran (NCRI) had reported that the sale of body parts and organs had become commonplace in Iran, often by poorer people selling their organs to make some money to survive. The NCRI even suggested that some people had been desperate enough to sell their newborn babies.

“What’s wrong with selling your kidney when you are in poverty? It would be better than the people and media must think about kidney patients, and do not spread rumors.” This was a comment made by the chair of the Majlis Health Commission Hossein Ali Shahryari in February 2017.

#Iran to Sell Organs of Death Row Inmates
The organs of death row prisoners in Iran could be pre-sold to buyers under a new law that is heavily condemned by Iran’s Association of Surgeons.https://t.co/20Qed9uXtg pic.twitter.com/iPNGBM972Y

The judiciary chief, Ebrahim Raisi, issued an order in July 2019 legitimizing the sale of organs from death row prisoners.  “If the sentenced person had volunteered to donate an organ before or after the execution and there is no medical impediment, the execution judge will act according to the instructions.”

This intention by the regime to profit from selling organs from executed political prisoners is hardly popular in Iran. In fact, it has led to even more hatred of the regime. It’s nothing news as the regime has used the same method since the Iran Iraq war. At that time, the Supreme Leader, Ruhollah Khomeini, ordered the taking of blood from death-row dissidents, who just happened to be mostly members and supporters of the Mojahedin-e Khalq (MEK Iran / PMOI).

The Iranian regime’s human rights record is abysmal. It arrests and executes anyone it thinks is a threat and even removes the organs for sale from those it slaughters. The international community should investigate the human rights abuses of the Iranian regime, including its barbaric sale of human organs, and hold those responsible to account.