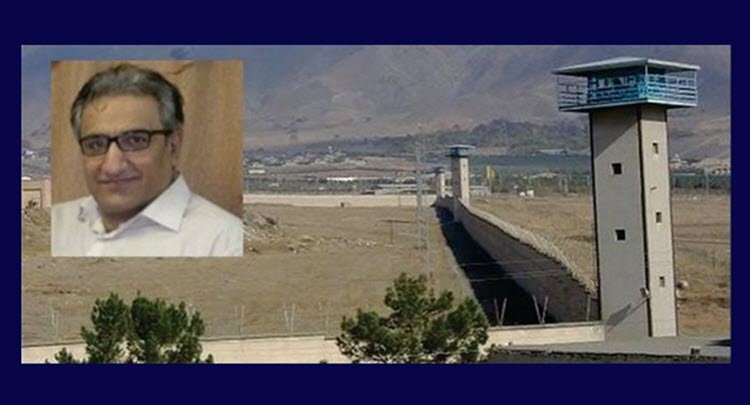 Afshin Baymani, a sick political prisoner in the notorious Rajai-Shahr Prison (Gohardasht Prison) suffered from what seems to be a heart attack on Sunday, and has since been refused any kind of hospital treatment.

In a report by the National Council of Resistance of Iran (NCRI), we are told that Mr. Baymani who is in his mid-forties suffers from a serious heart condition. He is currently held in Ward 4 of Hall 12 of Rajai-Shahr Prison in Karaj, north-west of Tehran.

Fellow political prisoners have said that Mr. Baymani was taken to the prison infirmary where the doctors recognised the gravity of the situation and recommended that he be sent to hospital. However, despite the doctor insisting that Mr. Baymani should not be sent back to the ward, the prison warden ignored this and sent him back anyway with two injections. The doctors advised that Mr. Baymani never be left along, even while he is sleeping, as he is at risk of suffering heart failure. On top of his heart condition (for which he needs open heart surgery), he has been told that he has serious problems with his lungs.

Mr. Baymani is a father of two and has been locked up in Tehran’s notorious Evin Prison and Gohardasht Prison in Karaj for around 16 years for apparently helping his brother avoid being arrested.

On 6th September 2000 he was originally sentenced to execution, but six years later this was reduced to life imprisonment.

Mr. Baymani is currently in very poor health after suffering from heart attacks in the past. He was one of several political prisoners who went on hunger strike in 2014 in solidarity with Iranian women in Isfahan, central Iran, who were at that time “were subjected to a spate of acid attacks by organized fundamentalist gangs affiliated to the regime”.

In December 2015 he started another hunger strike in protest against being sent to the ordinary prisoners’ ward.