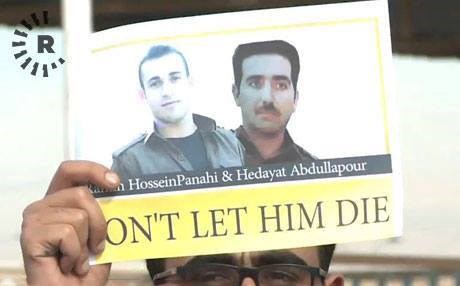 On Saturday, Iranian refugees gathered together in an act of solidarity in the Kurdistan Region’s capital of Erbil, outside the UNHCR headquarters.

Charged with membership in Komala, a Kurdish political party that resumed struggles against the forces of the

Islamic Republic in 2017, Ramin Hossein Panahi has been sentenced to death. On June 23, in an armed struggle with the Islamic Revolutionary Guard Corps (IRGC) three members of Komala were killed and an injured Ramin Hossein Panahi was taken into custody.
Two of the detainee’s brothers and several cousins were also arrested in a raid by the association shortly after the ambush on Peshmerga in the Kurdish region of Iran, also known as Rojhelat.

Also facing the death penalty on charges of working with a Kurdish group, Hidayat Abdullah Pur was arrested in 2016, after which an Iranian court handed down his sentence.

Twenty-two year old Ali Kazemi, was hanged on January 30th . in Bushehr province, after being convicted of murder that occurred when he was 15-years-old, His execution was carried out without any notice given to Ali Kazemi’s lawyer as required by Iranian law.

“We have gathered here today to condemn death sentence for political prisoners in Iran and Kurdistan and show support to all political prisoners in Iranian prisons,” the statement added. “In the end, we call on the UNHCR and all the other institutions advocating for human rights, artists, and freedom lovers of the southern Kurdistan to take practical steps to revoke the death sentences…”

Amnesty International has called justice in Iran “exceptionally cruel.” Magdalena Mughrabi, Amnesty’s Middle East and North Africa Deputy Director said, “By carrying out this unlawful execution, Iran is effectively declaring that it wishes to maintain the country’s shameful status as one of the world’s leading executers of those who were children at the time of their crime.” She added, “This is nothing short of an all-out assault on children’s rights, as enshrined in international law, which absolutely bans the use of the death penalty against someone who was under 18 years of age at the time of the crime.”

On Friday, Mughrabi warned of “grave concerns about the grim reality for those defending human rights in Iran today…”