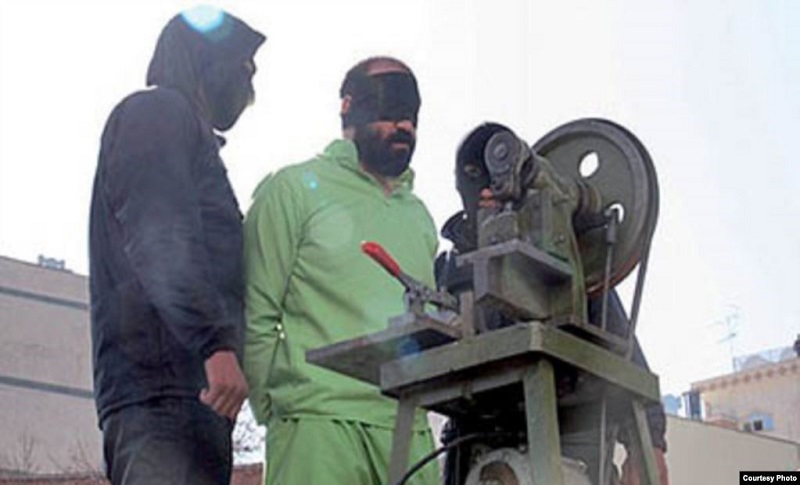 Iranian authorities brutally severed the hand of a man in Mazandaran province, northern Iran, on Wednesday, according to the regime’s justice ministry. The man was charged with theft.

“The policy of Mazandaran’s Justice Department is severe and indiscriminate punishment for people who disrupt public security and order”, a state-run news agency, Young Journalists Club (YJC) cited the statement as saying.

“Amputation is torture plain and simple, and administering torture is a crime under international law,” Amnesty International had previously said, regarding the regime’s violent punishments. “As a party to the International Covenant on Civil and Political Rights, Iran is legally obliged to forbid torture in all circumstances and without exception. Those responsible for ordering and executing such practices should know that they are liable to criminal prosecution under international law.”

#Iran: a Prisoner’s Hand Accused of Stealing Amputated
17 January, the inhuman sentence of hand amputation 4 a prisoner accused of “stealing sheep of villagers” was implemented by the Iran regime’s judiciary in central prison of #Mashhad. https://t.co/QTrTNg4ssu #IranProtests pic.twitter.com/CfY7HcdSV5

Iranian regime authorities constantly defend amputation as the best way to deter theft and have expressed regret that it cannot be practiced in public and on a widespread basis without international condemnation, Iran Human Rights Monitor (IHRM) reported on Thursday.

Amputation as a legal punishment violates Article 7 of the International Convention on Civil and Political Rights (ICCPR), which prohibits subjecting people “to torture or cruel, inhumane or degrading treatment or punishment.”

In May, there were reports that 23 prisoners convicted of theft had been sentenced to hand amputation and were waiting for their punishment to be carried out in the Greater Tehran Prison.

According to IHRM, between 2007 and 2017, the Iranian regime has issued at least 215 amputation sentences and carried out 125 amputations, including at least six amputations in public.