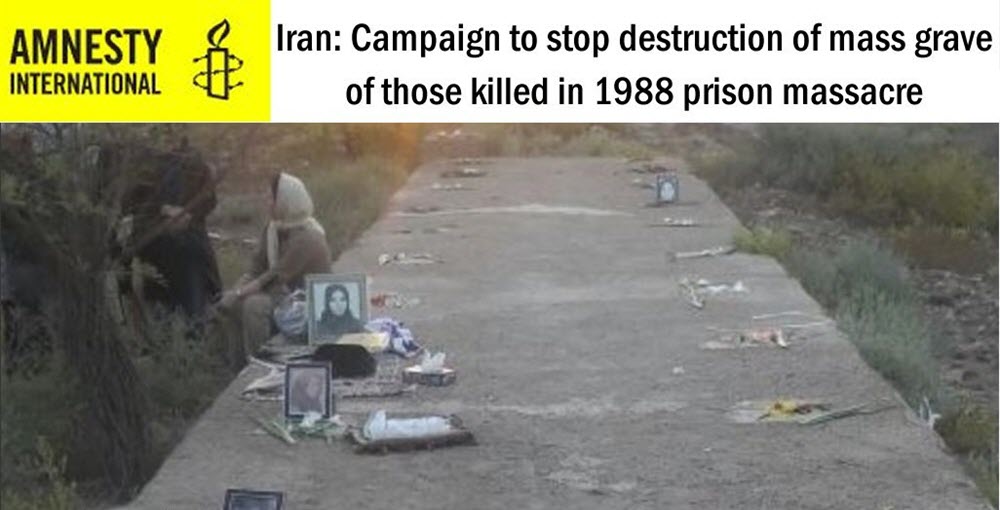 A campaign was launched earlier this week by Amnesty International, calling for Iranian authorities to stop destroying a mass grave in Ahvaz.

At this site, it is estimated that the bodies of at least a dozen political prisoners are buried there. They were executed during the 1988 massacre.

The site is being buried under large amounts of construction waste.

Amnesty International’s Research and Advocacy Director for the Middle East and North Africa, Philip Luther, said that the Iranian regime is attempting to destroy evidence from the 1988 massacre. He said: “It would also deprive families of victims of their rights to truth, justice and reparation, including the right to bury their loved ones in dignity.”

Luther said that the authorities should be preserving the mass grave sites, as per their duties, so that an investigation can be carried out and justice can be served for the many people touched by the massacre. He added that the families are being further tormented by recent events.

The campaign can be joined using the hashtag #MassGraves88.

A report has been submitted to the United Nations General Assembly. It details several points regarding the human rights situation in the country, including issues that require urgent and immediate attention.

It pointed out that the recent presidential election in the country was a sham because of the many candidates (1,636 in total), only six of them were announced. The Guardian Council basically hand-picked the candidates on the instruction of the Supreme Leader. What is very worrying about this is that one of the main candidates was part of the committee that oversaw executions during the 1988 massacre.

The report also mentioned that the regime is trying to cover up its crimes by destroying mass grave sites across the country, including the one that Amnesty International is currently campaigning for. It is extremely concerning that the Iranian regime is being allowed to destroy evidence in such a large crime against humanity when it should be doing all it can to preserve it.

The report also mentioned that the Iranian regime is still handing out medieval punishments, even for minor crimes. The people of Iran risk being arrested for so-called “crimes”. One such example of this is punishing citizens for eating in a public place during the holy month of Ramadan. During the most recent Ramadan, 90 people were arrested and 20 of these received flogging sentences.