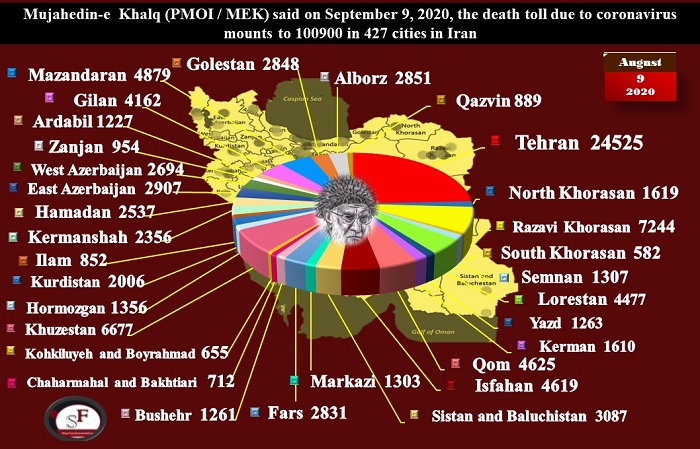 The Iranian regime has terribly mishandled the Coronavirus health crisis since the very beginning. Its lack of decisive action and the missteps it has taken have resulted in the death toll soaring to more than 100,900 according to The People’s Mojahedin Organization of Iran (PMOI / MEK Iran). The people have been left extremely vulnerable and they are angry.

Iranian President Hassan Rouhani has also failed to be transparent with regard to the situation. A few months ago, he said that the government has been truthful with the people and that there has been no delay in informing them of the situation. Yet this is a complete lie. The beginning of the health crisis was marked by cover-ups that are still continuing.

More than 100,900 people have died of the novel #coronavirus in 427 cities checkered across all of #Iran's 31 provinces, according to the Iranian opposition PMOI/MEK. pic.twitter.com/rFCDpm4Hhx

One such example is the Ministry of Health’s official death toll which is grossly understated. And evidence discovered by the main opposition to the Iranian regime – the National Council of Resistance of Iran (NCRI) – has been confirmed, making it very likely that the first cases of the virus were detected back in December. This is several months before the people of Iran were informed.

And it would make sense that Iran was not far behind China in terms of the start of the outbreak considering that the two countries have close ties. For months, the regime failed to suspend flights between Iran and China despite the clear dangers. This is nothing more than playing with the lives of people.

The regime has always put its own interests first, and this time has been no different. It lied about the COVID-19 situation so that people would participate in the sham parliamentary elections. The Supreme Leader told the people it was their religious duty to participate in the vote, but the people could see the elections for the mockery that it was. Not surprisingly, the turnout was the lowest since 1979.

Official statements from the Health Ministry currently states that the #coronavirus death toll is between 21,000 and 22,000 people as opposed to #MEK #Iran reports which show that the real death toll is nearly 100,000.https://t.co/8esuBAIoLP

Of the few people that did attend, no hygiene measures were put in place for those working in the polling stations, nor for the public. This was undoubtedly one of the factors in the spread of the virus.

The devastation that the virus has caused in Iran, not just on a humanitarian level, but also on an economic and social level, is clear for Iranians to see. They know that the regime’s death toll is nonsense and they hope that the international community will realize this.

The death toll reported by the regime is a fifth of that reported by the opposition that has been closely monitoring the situation since the beginning. Despite the regime’s claims that the pandemic is under control, it is very clear that it is not. At all.

The President-elect of the National Council of Resistance of Iran’s (NCRI) Mrs. Maryam Rajavi said: The tragic coronavirus pandemic has cast a dark shadow over our nation for the past seven months. Khamenei, Rouhani, and the gangs ruling our country do not spend even a small portion of the hundreds of billions of dollars they have usurped from our nation.

The international community must recognize that the regime is deceiving the people of Iran, and the whole world, and it must hold it accountable. Especially when so many lives are at stake.